Firebox Records has set an October 20 release date for the new album from DOOM:VS, the Swedish one-man project featuring DRACONIAN's Johan Ericson. Entitled "Dead Words Speak", the CD was written and recorded by Johan himself at the DRACONIAN rehearsal room. With a more heavy approach regarding the sound than previous efforts, the music is both darker and more eerie than ever before. Filled with emotion and despair, "Dead Words Speak" is a personal settlement with the past. Almost crushing sometimes, the music never lacks the evocative melodies that signify DOOM:VS.

According to a press release, DOOM:VS is a project born from the idea of constructing something utterly dark and personal in the unique field of doom metal. Near the closure of 2004, the self-produced demo album "Empire of the Fallen" was released — a four-track obscure and prominent contribution to the doom metal underground. The demo was very well received and led to a deal with the Finnish label Firedoom Music (extreme doom metal specialist label of Firebox Records). Soon after that the debut album, "Aeternum Vale", was recorded and finally released in 2006 and was met with very good reviews throughout the doom metal community. 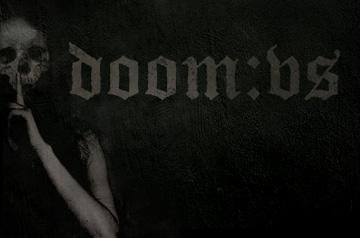