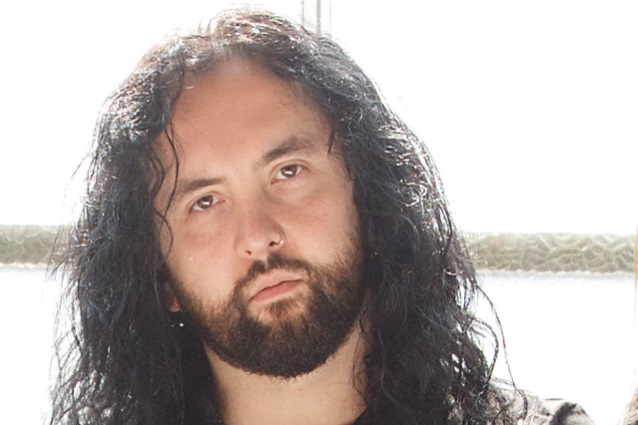 DRAGONFORCE Bassist: How 'Reaching Into Infinity' Ended Up Being Band's Most 'Diverse' Album To Date

Jonny Goldsmith conducted an interview with DRAGONFORCE bassist Frédéric Leclercq before the band's October 5 concert at Riverside in Newcastle, England. You can now listen to the chat using the SoundCloud widget below.

Speaking about what makes DRAGONFORCE's latest album, 2017's "Reaching Into Infinity", the band's most diverse effort to date, Leclercq said: "I ended up writing most of the material this time, as opposed to before, it was Sam [Totman, guitar] writing most of the stuff. In fact, the first four albums is almost only him — or first three. After four or five albums writing everything on your own, you need new ideas, fresh ideas — better ideas. And mine are actually way better — way superior. [Laughs]

"The previous album, 'Maximum Overload', we wrote everything together," he continued. "And this time that's what we wanted to do, but for some reason, it just didn't work out that way. Sam came to my place in France and we were supposed to start writing songs together. And I was, like, 'I have one [song] that I need to finish on my own first.' And he was, like, 'Yeah, yeah. Me too.' And he went in a different room and he ended up being stuck on his song and then another song, while I was [coming] up [with] more ideas.

Asked if every member of DRAGONFORCE has a say in terms of how an album sounds during the writing process, Leclercq said: "It depends. When I write music, I tend to have a very clear idea of what I want. I'm not gonna write the solos, but I'm gonna write the melodies. So it's not set in stone, but I have a pretty fine idea. I mean, I write the rhythm guitar, the bass, the vocal melodies, so I guess when my demos are done, compared to the final product, it's 80 percent the same. But then you want the other members to actually express themselves; otherwise, it's not really fun. If you always [look over their shoulders and say], 'No, do it that way. No, you do it that way,' then you lose the actual 20 percent that makes it magical."

"Reaching Into Infinity" was released in May 2017 via earMUSIC on CD, LP and a special-edition CD and DVD. The follow-up to 2014's "Maximum Overload" marked DRAGONFORCE's third full-length studio release with singer Marc Hudson, who joined the group in 2011 following the departure of original frontman ZP Theart (now in SKID ROW).