"Ultra Beatdown", the new album from British extreme epic power metallers DRAGONFORCE, has entered the UK chart at position No. 18. It has also landed on the Irish chart at No. 47.

The CD was released in North America on August 26 via Roadrunner Records.

DRAGONFORCE will hit the U.S. for a six-week headline tour that hits major markets. DRAGONFORCE are a touring machine, but their last headline tour occured two years ago in September 2006. It was a sold-out spectacle that cemented the band's reputation as a live powerhouse, so it's time for the band to once again topline a bill. TURISAS will serve as main support for the tour, which kicks off on November 1 and runs through December 19.

DRAGONFORCE has absolutely erupted since the release of 2006's "Inhuman Rampage", which has sold over 300,000 copies and counting. They've captured the hearts and hands of Guitar Hero 3 fans with their masterful guitar wizardry and have graced the January 2008 cover of Revolver as well as the covers of Guitar World and Decibel. The accolades on "Ultra Beatdown" keep pouring in, with Alternative Press lauding the band as "poised to enter the relatively underoccupied pantheon of British metal." 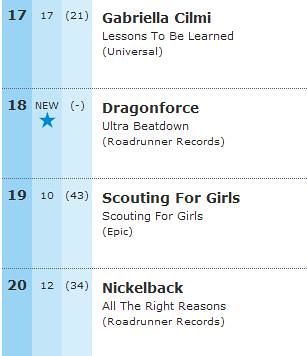