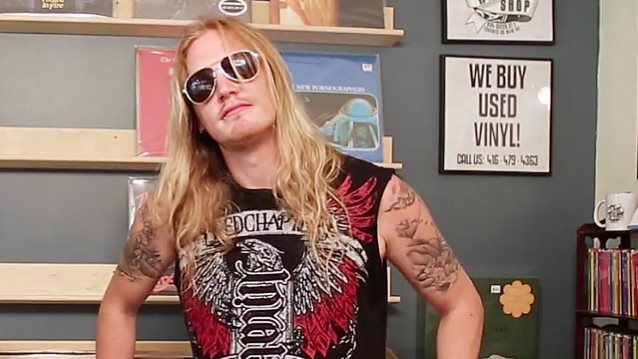 On July 24, Alex Stojanovic of Metal Master Kingdom conducted an interview with DRAGONFORCE singer Marc Hudson in Toronto, Ontario, Canada. You can now watch the chat below.

Asked about the absence of Vadim Pruzhanov from DRAGONFORCE's current touring cycle and the group's decision to not hire a replacement keyboardist, Marc said: "The thing is with Vadim, he's an amazing keyboard player and we want people to know he's definitely part of the band. So I think, for that reason, it was, like, well, if he wants to be at home with his wife and child, then fair enough; I would do the same. And I think it's better to maybe not give the fans the impression that he's been replaced because we have a new guy come in and do it for a tour. So, yeah, I think we're just waiting for him to come back when he's ready and that'll be that."

Pruzhanov released a videotaped message in May (see below) in which he explained his reasons for sitting out DRAGONFORCE's current tour. He said: "What we do normally is we try to plan tours up ahead. Album cycle first year would be a world tour, and the second one would be festivals mainly. I think around June 2016, I received an e-mail with a brief schedule. The first leg of tour was… I think it was about three and a half months, plus the rehearsals, two weeks, I think it was in total about four months. Straight away, I thought, 'Well, that's a little bit too long.' And at that point, my little daughter, she was only a year and a half, and at that point, I thought it would just be unfair to leave her for four months straight. So I decided, I obviously told the guys that, 'I can't really do it, 'cause it's a bit too long for me.'

"I obviously do understand the reasoning and why the band chose to do a tour of that length," he continued. "Because we had this discussion last year and we decided that I'm not doing any of it, I had to make other plans for myself of what I'm doing this year and the following year, so I arranged other work and other projects that I'm involved with. Because of particular circumstances, the album release was pushed back, and that's why that four-month tour was no longer a four-month tour.

"As one of the company directors, I understand that some business decisions need to be made, and as a business decision, it's the right thing to do to go for a longer tour, like four months, but as a family man, I have to choose family and I have to prioritize. Family is the most important thing to me — I'll be upfront here — and as much as I love playing live for you guys, I have to be there for my family. I'm sure a lot of fathers out there will understand my point of view, and I just didn't wanna come back from the tour and have my daughter shy away from the sight of me; it would simply just break my heart. So I just wanted to basically be there for her and just try to be a good dad and be there for her as much as I could and strengthen that bond."

Vadim added: "We discussed this last year and I was told that, due to contractual obligations and all the business stuff, I can only either do all of the touring on this album cycle or do none of it. Obviously, I chose the second option."

DRAGONFORCE is continuing to tour in support of its latest album, "Reaching Into Infinity", which was released on May 19 via earMUSIC. The follow-up to 2014's "Maximum Overload" is the band's third full-length studio release with Hudson, who joined the group in 2011 following the departure of original frontman ZP Theart (now in SKID ROW).