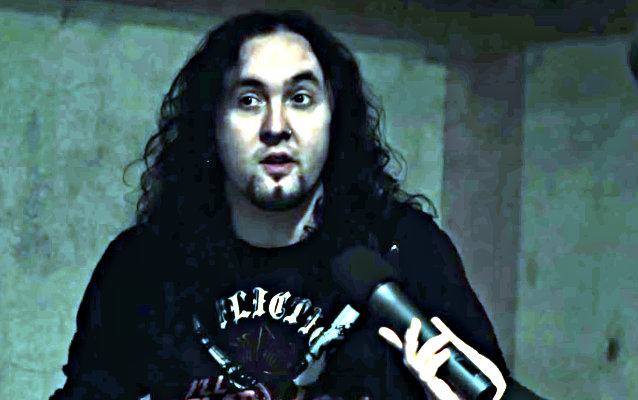 Simmonstold Esquire magazine in September — in an interview conducted by his son Nick — that "rock did not die of old age. It was murdered. Some brilliance, somewhere, was going to be expressed and now it won't because it's that much harder to earn a living playing and writing songs. No one will pay you to do it."

Asked to weigh in on Gene's comments, Leclercq told Stay Tuned Interviews (see video below): "I don't know… I mean, it's very hard. I was actually talking to a bunch of friends of mine from my hometown, and we were talking about the fact that there's tons of festivals nowadays. And that's gonna come to an end, like, maybe in 10 years, 20 years, the formula's gonna change. So I guess music is evoving all the time, and so is rock and roll. But I don't think it's dead. As long as people still enjoy going to gigs and seeing people playing their instruments, as long as people do enjoy that sort of vibe and atmosphere, it's gonna carry on. Maybe it's gonna change. Maybe in 20 years, rock and roll's gonna be done with… I don't know… cellos and trumpets, and there will be no drums, no bass, no distortion — who knows? — but I think that the energy of a bunch of dudes rehearsing in a garage and practicing all together and they wanna play and get drunk, that's gonna exist for quite a long time. So, no, it's not dead. I don't think it is."

DRAGONFORCE's new album, "Maximum Overload", was released on August 19 in North America via Metal Blade and August 18 in Europe through earMUSIC, the Hamburg, Germany-based international rock label which is part of Edel Group. The CD was recorded at Fascination Street studios in Örebro, Sweden with Jens Bogren, who has previously worked with OPETH, THE DEVIN TOWNSEND PROJECT, AMON AMARTH, KATATONIA, SOILWORK and SYMPHONY X, to name a few. It marks the band's first-ever album involving an outside producer, having historically opted to record themselves in association with Karl Groom.