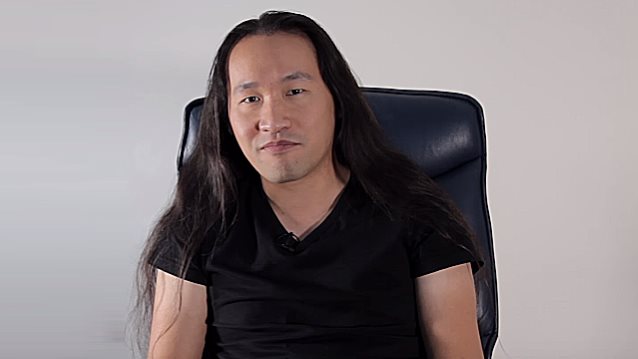 DRAGONFORCE guitarist Herman Li recently dropped by Kerrang! to talk the U.K. magazine through his favorite guitar riffs of all time.

A four-minute clip of Li discussing his selections — which include MEGADETH's "Holy Wars", METALLICA's "Creeping Death", Joe Satriani's "The Extremist", SYMPHONY X's "Sea Of Lies" and DREAM THEATER's "Under A Glass Moon" — can be seen below.

DRAGONFORCE's latest album, "Reaching Into Infinity", was released on May 19 via earMUSIC on CD, LP and a special-edition CD and DVD. The follow-up to 2014's "Maximum Overload" marks the band's third full-length studio release with singer Marc Hudson, who joined the group in 2011 following the departure of original frontman ZP Theart (now in SKID ROW).

The bulk of the recording sessions for "Reaching Into Infinity" took place at Fascination Street studios in Örebro, Sweden with producer Jens Bogren, who has previously worked with OPETH, THE DEVIN TOWNSEND PROJECT, AMON AMARTH, KATATONIA, SOILWORK and SYMPHONY X, to name a few. The band also laid down tracks while touring their "Killer Elite" best-of album, utilizing Lamerluser Studios in London, U.K.; Dark Lane Studios in Witney, U.K.; as well as the band's own Evil1 Studios in Charleville-Mézières, France and Shredforce One Studios in California.

"Reaching Into Infinity" is DRAGONFORCE's first album to feature Gee Anzalone, the Italian drummer who has laid down an insanely impressive performance to provide the perfect backbone to the DRAGONFORCE sound, which, of course, still boasts the bands trademark crazy-fast solos, courtesy of guitarists Herman Li and Sam Totman.