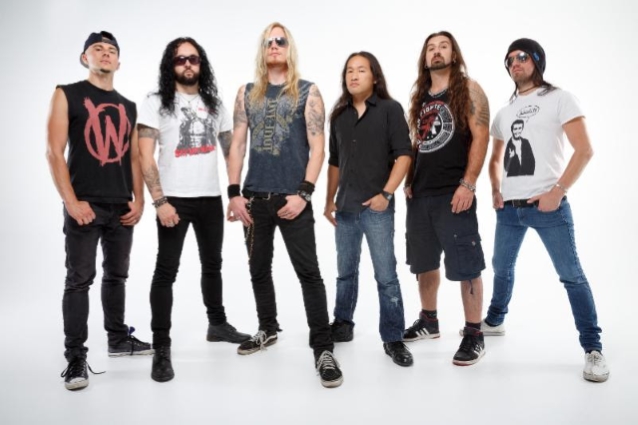 DRAGONFORCE's 'Through The Fire And Flames' Certified Platinum In U.S.

DRAGONFORCE's "Through The Fire And Flames" was certified platinum by the RIAA (Recording Industry Association Of America) on May 23 for accumulating 1 million certified units. According to the RIAA, one equivalent song unit is equal to a single digital song sale, or 150 on-demand audio and/or video streams.

This past March, the "Through The Fire And Flames" music video reached a new milestone: It surpassed one hundred million views on YouTube — DRAGONFORCE's first music video to do so.

"Through The Fire And Flames", the leadoff track from 2006's "Inhuman Rampage" album, sparked a watershed moment in DRAGONFORCE's career. The song's inclusion in the "Guitar Hero" video game catapulted the band's international profile and inspired multitudes of gamers to try to keep up with guitarists Herman Li and Sam Totman's lighting-fast riffs. In honor of its massive popularity, "Guitar Hero Live" included the song in its "Shred-A-Thon" on GHTV.

"It was a great feeling to see our music was heard by so many people around the world, and people were completely freaking out over it," Li recalled of when "Through The Fire And Flames" was at the height of its popularity. "We definitely do not make three-minute long, commercial music. A seven-minute, fast, melodic metal song with long guitar solos and crazy retro video games sounds became totally cool. We were getting recognized everywhere we went, from Best Buy to airport security. A couple TSA officers once asked to see my fingers. They wanted to see the fingers that recorded 'Through The Fire And Flames'!"

"Inhuman Rampage" was officially certified gold in July 2017 by the RIAA (Recording Industry Association of America) for sales in excess of half a million copies.

DRAGONFORCE's third album, "Inhuman Rampage" sold almost 10,000 copies in its first week of release to land at position No. 103 on the Billboard 200 chart.

"Inhuman Rampage" was the second-to-last album to feature original DRAGONFORCE frontman ZP Theart, who exited the band in 2010 and was replaced by Marc Hudson.

DRAGONFORCE's latest album, "Reaching Into Infinity", was released in May 2017 via earMUSIC.