Progressive metal giants DREAM THEATER have announced the rescheduled dates for their recently postponed North American leg of the "Top Of The World" tour. The shows will now kick off in Mesa, Arizona on February 2 and run seven weeks before ending in Austin, Texas on March 21. The tour will also make stops in Los Angeles, California; Montreal, Quebec, Canada; New York City and Dallas, Texas, among others, and will mark the first live performances of music from DREAM THEATER's latest release, "A View From The Top Of The World". ARCH ECHO will be the opener on all dates in the United States and FALSET will be the opener on all of the dates in Canada. Information on tickets for all upcoming shows as well as VIP packages can be found at www.dreamtheater.net.

Dates for the first leg of the North American "Top Of The World" tour are:

Last month, DREAM THEATER singer James LaBrie told The Metal Voice about the band's decision to push back the tour: "It just came down to how comfortable we were with going out. We were getting kind of mixed messages from promoters and our agencies. Our management was looking into it across the board with people that were out there, tours that were going on, tours that had come down.

"When you put together a tour, the amount of money that's put into a tour, it's astronomical," he continued. "And the kind of production that we go out with is pretty big; it's pretty substantial. We were just getting a lot of indication that the bands that had been going out were out for a week or two and somebody within the band or the crew came down with COVID and then the whole camp had to be shut down up to 10 days. Well, that's financially disabling for any tour of any magnitude, that you can just pull down a whole camp of, let's say, 30-something people and the amount of money that's generated while you're out there. You're talking 10 days where you're just dead in the water.

James also addressed DREAM THEATER guitarist John Petrucci's recent comment that the the tour postponement was "unfortunate" and not a unanimous decision, with Petrucci and bassist John Myung being willing to return to the road as soon as possible and the other three guys opting to stay home.

"It comes down to sometimes you're gonna have to agree to disagree, and granted, as he put it — I saw it; fans forwarded it to my site — as he said, he was frustrated," James said. "Well, truth be known, we're all frustrated that we're not out there touring. That's what we love to do — we love to be out. But some of us felt that we weren't willing to take that risk and come down with this unfortunate virus. It just didn't seem to me, and to the other two guys that were on the side of the fence that I was on, it didn't make sense to risk it at this point. But everything is being rescheduled. It's been postponed, and everything is coming back online in February. And I think we're gonna be closer to not only more people being vaccinated but also herd immunity. So let's see what happens."

DREAM THEATER shared the news of the postponement in a statement posted on social media on September 27. The group wrote: "DREAM THEATER have made the difficult decision to move their October-December 2021 North American tour dates to early 2022. In light of current instabilities to touring that remain due to the COVID-19 pandemic, we feel confident that this is the right decision.

"Know that we are as disappointed as you are that we will have to wait a little longer to bring DREAM THEATER music to you live. We miss performing for you all and can't wait until we can be on stage bringing our new album and fan-favorites to you.

"This was an extraordinarily challenging decision to make but needed to be done after taking into consideration the varying local mandates across North America. In an effort to present the absolute most complete and engaging DREAM THEATER experience that our fans around the globe have come to expect, we feel we are all best served to postpone all touring activities to early 2022.

"At this time, we ask that everyone hold on to their tickets as we are working frantically to finalize the reschedule of all of these dates. All shows are currently being re-booked to begin in February 2022. Please keep an eye on our website, and we'll have a complete, updated itinerary shortly. All previously purchased tickets will be honored. Please consult your local point of purchase for any inquiries regarding refunds.

"We know that we all have eagerly awaited a return to normalcy, and the opportunity to enjoy live DREAM THEATER music together again. We apologize profusely but hope that everyone can understand the logic behind this decision.

"Playing music for our fans is all we ever want to do. We look forward to seeing each and every one of our fans as soon as possible. We wish it could have been sooner, but we are counting the days until we can see you all again."

In October, Petrucci told Robert Cavuoto of Sonic Perspectives about the DREAM THEATER tour postponement: "Well, it's an unfortunate decision. John [Myung] and I really wanted to tour, and are dying to tour — dying to get out there and support the [new DREAM THEATER] record. And unfortunately, we couldn't convince the other guys that it was safe. So, it wasn't a unanimous decision, unfortunately.

"It's frustrating for me, because everything has opened up and concerts are going on, and theaters and arenas and clubs and everything is open," he continued. "Bands are out there, and a lot of my friends are touring successfully. And there are ways to do it safely, which we were very prepared to do. But, like I said, we couldn't convince the other guys it'd be safe, and so we had to push it off. 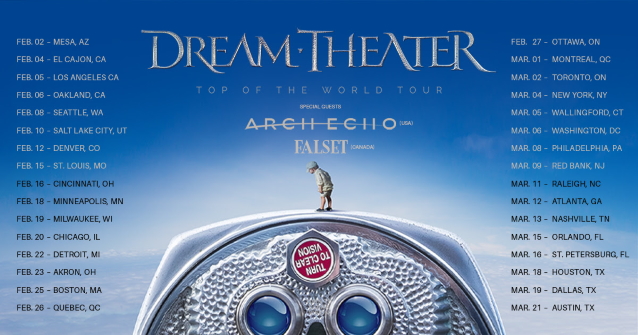