No other band has affected modern progressive metal as deeply or widely as American quintet DREAM THEATER. Formed at Berklee College Of Music as Majesty in 1985 by guitarist John Petrucci, drummer Mike Portnoy and bassist John Myung, the group have spent 30 years repeatedly pushing new boundaries and reinventing their identity. Although other acts — such as QUEENSRŸCHE and FATES WARNING — paved the way for the prog-metal subgenre, DREAM THEATER were, without doubt, the first to meld influences from both metal and progressive rock into a groundbreaking blend of quirky instrumentation, extensively complex arrangements, and exceptional songwriting. Whether with subtly or overtly, they've since left their mark on just about every progressive metal band that has followed.

In this book, Blum examines every DREAM THEATER studio album, and their behind-the-scenes circumstances, to explore how the group impacted the genre with each release. Whether classics of the 1990s like "Images And Words" and "Metropolis Pt. 2: Scenes From A Memory", benchmarks of the 2000s like "Six Degrees Of Inner Turbulence" and "Octavarium", or even thrilling modern efforts like "A Dramatic Turn Of Events" and "Distance Over Time", every sequence of albums contributes something crucial to making DREAM THEATER's legacy nothing short of astonishing.

Blum is an associate editor at PopMatters, holds an MFA in creative writing, and is the founder/editor‐in‐chief of The Bookends Review, an independent creative arts journal. He focuses mostly on progressive rock/metal and has contributed to many other publications, including Sonic Perspectives, Paste, Progression, Metal Injection, Rebel Noise, Prog and Sea Of Tranquility. He is the author of "Jethro Tull On Track", published by Sonicbond in 2019. Finally, he records his own crazy ideas under the pseudonym Neglected Spoon. He teaches English courses at various colleges. He lives in Philadelphia, Pennsylvania. 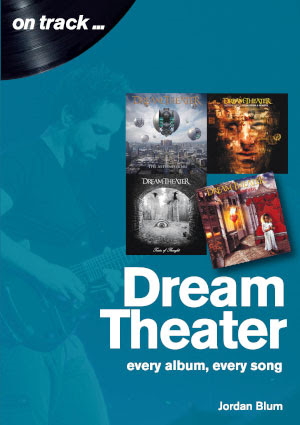