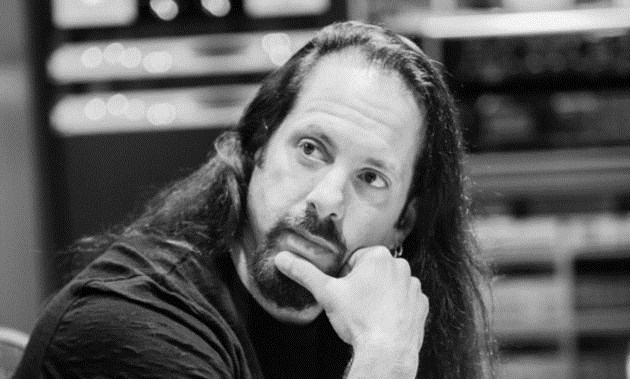 DREAM THEATER Guitarist: Our Fans Are 'Very Passionate And Really Supportive Of What We Do'

Peter Hodgson of IHeartGuitarBlog.com recently conducted an interview with guitarist John Petrucci of progressive metal giants DREAM THEATER. A couple of excerpts from the chat follow below.

IHeartGuitarBlog.com: The previous album seemed like you were trying to make the definitive DREAM THEATER album, whereas this one seems a little more relaxed, more exploratory. Is that an accurate assessment?

Petrucci: We definitely approached "A Dramatic Turn Of Events" like we had something to prove as we were writing it, and we wanted to make sure we created something that was going to really assure our fans that we were here to stay and that everything was okay and that we were moving forward in a positive way. Definitely the tone of that album comes across that way, for sure. Now, this one: after that album came out and thankfully was received so well, we had a successful tour where we were able to learn more about Mike Mangini as a person and as a drummer, and we were able to, as you said, go into this album and let our hair down and forge ahead with a new sound, a new approach, maybe more experimental. I think that the music on this album comes across as having a more gusty rock thing. When we were doing some of the solo sections, we wanted to capture the vibe of playing live and improvising and playing with that kind of real fire that happens when you're playing together as a band. That's how we wrote it and that's how we think it's coming across. With the last one, there wasn't a drummer in the room as we were writing it, so it's probably more controlled-sounding, and this one is — and I've used this term before to describe Mangini — unleashed. Freer-sounding.

IHeartGuitarBlog.com: Did you do anything in particular as a producer to facilitate that way of working?

Petrucci: Yeah, absolutely. From the beginning, in order to capture that, what we did totally differently was not only did we set up in the studio where everyone's playing live, but we made sure that the sounds that we were capturing at that very early stage were usable sounds that could be performances on the album. So we took some extra time in the beginning to get all the drum sounds, the guitar sounds, bass and everything, so as we were writing, if we captured that moment of fire and passion when it was written, we were able to actually keep that and integrate it along with whatever we had overdubbed as well. And that was really, really helpful. As a producer, I was able to hear what the album was sounding like right from the beginning. I didn't have to wait for the mix to hear how the guitar would sound once it was hyped up. Everything was already sounding that way. When you're hearing on the album is what it sounded like from day one, pretty much.

IHeartGuitarBlog.com: It must be a strange moment before the album comes out, when you're sitting on it and hearing feedback from people who have heard it but the general public hasn't got their hands on it yet.

Petrucci: Absolutely! I'm dyin'! It's like you have something you're so proud of and you just want to say, "Check this out! Listen to this!" There's this feeling of excitement and anticipation and a little bit of anxiety, but generally it's pride. You feel like you worked really hard on something and you just can't wait to share it. That's what it's all about: sharing it and having that experience with our listeners that we're really lucky to have.

IHeartGuitarBlog.com: Well just looking at the reactions to "The Enemy Inside" when it was released…

IHeartGuitarBlog.com: I don't think I saw any negative comments!

Petrucci: Y'know what? Yeah! That was so awesome! That was so incredible to see. And it just puts a smile on my face. I love our listeners because they're very discerning but they're very passionate and really supportive of what we do, so when I saw that kind of reaction I was like, "Y'know what? That's freaking awesome." Because to put out something you're proud of and to have people react in the way that you would hope means that you're all on the same page, and it's just a great beginning to this whole process.

Read the entire interview at IHeartGuitarBlog.com.