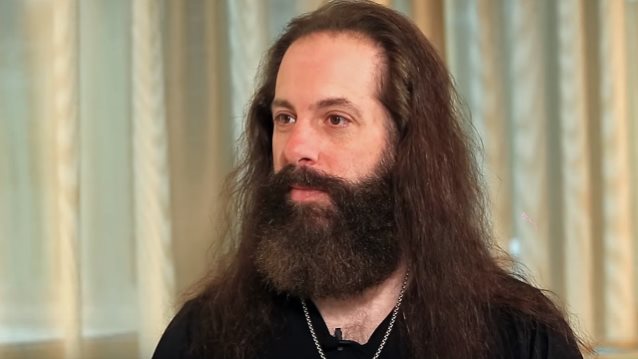 Warner Music Italy recently conducted an interview with guitarist John Petrucci of progressive metallers DREAM THEATER. You can now watch the chat below.

Speaking about the songwriting process for the band's wildly ambitious 2016 double concept LP, "The Astonishing", Petrucci said: "It was actually really interesting and really fun and very different. What we did is I wrote the story first. And then… A couple of things: one is as I was writing the story, I would get a musical idea and just record that, just a little bit, on my phone. And when I shared the story with Jordan [Rudess, keyboards], he would do the same thing. So, really quick, [like] 'I was thinking about that part of the story. Here's a little theme.' But that was just a small part of it. The bigger part was when we actually sat down, like, 'Okay. Now we have to really write this album.' I took the story and I storyboarded it into all the different scenes, and they were, like, thirty-four or something like that. And then we would read the story and say, 'Okay, this is what's happening here. This is the character that's important. This is what's happening in the story.' And we would just kind of… It was almost like scoring a movie, I guess. We would just write a score for that. Like, 'What's happening? Oh, she's walking in the dark. What would that sound like?' So there was a lot of that scoring thing going on. It was really non-traditional writing, as far as DREAM THEATER [way of] writing [goes]. It was so much fun. It was mostly just Jordan on piano and me on an acoustic guitar, just really getting down to the basic song structure, and then we built it from there and had it all orchestrated. So it was fun — really different."

DREAM THEATER recently completed the second leg of its extensive North American headline tour which found the group performing "The Astonishing" in immersive and interactive settings for a unique and unmatched live experience.