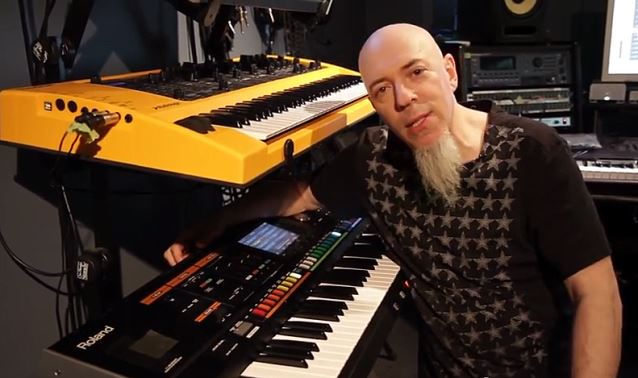 DREAM THEATER Keyboardist: 'We Feel That This Is One Of The Best Albums That We've Done'

Brian Giffin of Australia's Loud magazine recently conducted an interview with keyboardist Jordan Rudess of progressive metal giants DREAM THEATER. A couple of excerpts from the chat follow below.

Loud: Does releasing a self-titled album mark some sort of new beginning for DREAM THEATER?

Rudess: I think it was more that we wanted to put the stamp of a self-titled album here because we felt very strong about it. We felt like we're at this great point where we felt that people should take notice. We've been very clear — we're all getting along so well; musically we're having a great time together in the studio; and we felt that we've made a great album that we want people to know about. If you want to know what DREAM THEATER is about, check this album out, because we feel that this is one of the best albums that we've done.

Loud: What was it like reconvening to record this time with [new drummer] Mike Mangini a part of the band?

Rudess: He was really well behaved, so it was good. It was a lot of fun to have him there, unlike the previous album where we brought him in for the drum parts after the music was written. For this one, he was there the whole time. Some people know it, some people don't, but Mike Mangini is a very upbeat character. He's very funny, he's got a very good nature, he's lively and in front of the drums, he's a madman. He can play things no one else can play. So him being there personally, with his upbeat personality, and him contributing to the dynamic to the music we were writing really gave the music a real spark. So we enjoyed that quite a lot. With "A Dramatic Turn Of Events", we had a good time writing that, but this time, all being together working on the album as a band was great. We had been on tour with Mike Mangini for a year, we knew that we all got along, we knew that we were a very effective unit with each other playing music. The fans had all voiced their opinions and they all loved our shows.

Loud: Tell us something about "Illumination Theory", because that's quite an extensive piece.

Rudess: Well, I come from a Julliard classical music background, I like pieces where motifs and ideas get developed and changed and can be allowed to breathe and that track's certainly not any sort of standard pop song format in any way, shape or form. I just love the fact that we're just really going for it and there's all these kind of progressive parts where there's interesting counterpoints and harmonic changes going on, and I'm also very fond of the fact that in the middle section of "Illumination Theory", there's that whole section that really is very ambient and very electronic-soundscapey which leads into a string ensemble part which was actually done with the help my young protege Eren Başbuğ, a young Turkish arranger/conductor who took what I had composed on my keyboard and fleshed it out for a string orchestra. And then the string orchestra came into the studio and he came in and conducted them. That piece just has so much to it. I love when we get deep and it all gets a bit wild, and I also love that in the midst of all that madness, we really let that middle section to really breathe and slow down and be melodic like a movie score.

Loud: There always seems to be at least one song on every album that really shows what DREAM THEATER is all about and that's definitely the track this time around.

Rudess: I think that's really important, because a lot of the songs on this album are a little bit more concise. Believe it or not, there are two songs in the four-minute range on this album. It's like we managed to bring our music a little bit more to the point, but at the same time we thought, "Hey we're DREAM THEATER! We could do, we should do a track that goes for it and is more epic," and that's what "Illumination Theory" was more about.