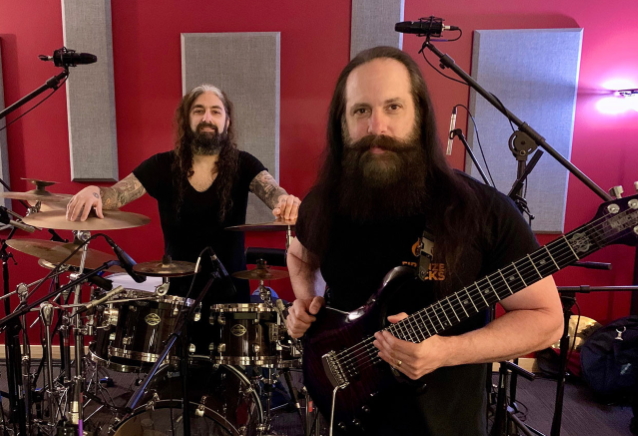 DREAM THEATER guitarist John Petrucci will release his second solo album, "Terminal Velocity" in the fall via Sound Mind Music/The Orchard. The follow-up to 2005's "Suspended Animation" features guest musicians Mike Portnoy (SONS OF APOLLO, ex-DREAM THEATER) on drums and Dave LaRue (DIXIE DREGS) on bass. The effort marks the first time Petrucci and Portnoy recorded together in over a decade, as well as the first since Portnoy departed DREAM THEATER.

"Having Mike play drums on this record was really special for me, and he did an absolutely incredible job navigating the various styles and technical challenges my music presented in the way that only he can do," Petrucci told Billboard. "It was very cathartic for the both of us, I think, to be playing music together again after all these years, and it really felt great. Mike's spirited, intuitive and energetic playing truly helped to elevate these new songs to a level that I couldn't be happier with."

Earlier this month, Petrucci told the official DREAM THEATER fan club that out of the nine songs on "Terminal Velocity", two of them he had played live during the "G3" tours and at his guitar camp. "One of them is a really old song from the early '90s when I was doing guitar clinics," he explained. "Actually, it's called 'Gemini', and there's a snippet of it on the 'Rock Discipline' video I did back in '95; there's a little bit of me playing that. So, for anybody that knows of that song, it's sort of an interesting little throwback to that, 'cause I never got a chance to really record it properly. There was one song I had written, I guess, around the same time as 'Happy Song' and 'Glassy-Eyed Zombies' that I played on 'G3', but I never did anything with it. Honestly, I kind of forgot I had it. It's called 'The Way Things Fall'. When I was looking through all my files and everything, I was, like, 'I forgot about this song,' and I had a full demo of it. I was, like, 'This is really cool.' So I was able to record that for real. And then that leaves the remaining five songs, which are all brand new. And I wrote those and recorded those, along with the other four, again, over about two months."