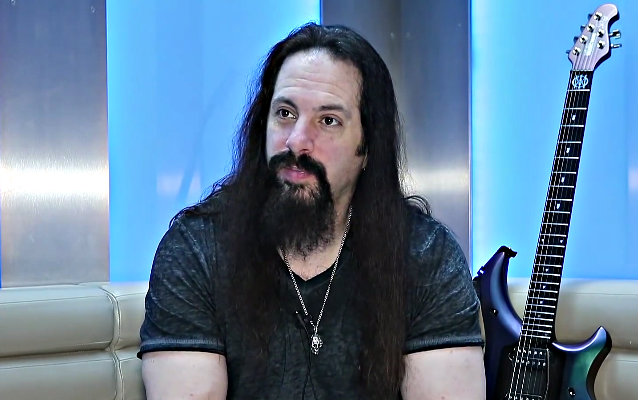 GuitarMania.eu conducted an interview with guitarist John Petrucci of progressive metal giants DREAM THEATER on January 25 in Vienna, Austria. You can now watch the chat below.

DREAM THEATER's video for the song "The Looking Glass", will premiere on Monday, February 3. The track is taken from the band's latest, self-titled album, which sold around 34,000 copies in the United States in its first week of release to debut at position No. 7 on The Billboard 200 chart. The CD arrived in stores on September 24, 2013 via Roadrunner.

Speaking to Music Radar, Petrucci stated about "The Looking Glass": "The song is definitely a tip of the hat to RUSH. We're such fans — they've been a huge influence on us, and we continue to admire and look up to them. One of the great things about them is how they write really uplifting songs with positive messages, but they always sound cool.

"It's really interesting. 'The Spirit Of Radio', 'Limelight' — those are big, big songs with big arena-rock riffs in a major key. Even 'Free Will' has that. The songs aren't dark, but they're tough. It's really hard to write something that can cut both ways like that, but that was my goal.

"'The Looking Glass' has a few different stylistic changes: There's the RUSH arena-rock major riff, but the verses are tricky as far as time signatures, and the style is a little darker. The pre-choruses are very pretty and flowing — they're in half-time — and the choruses open up and get really hooky. From verse to pre-chorus to chorus to riff, you've got a lot of musical styles, and that helps to keep things interesting."

DREAM THEATER's "Along For The Ride" tour will pick up on March 20 in Toronto, Ontario, Canada following the band's European tour and then continues through the end of April where it will eventually wrap up in Guadalajara, Mexico.