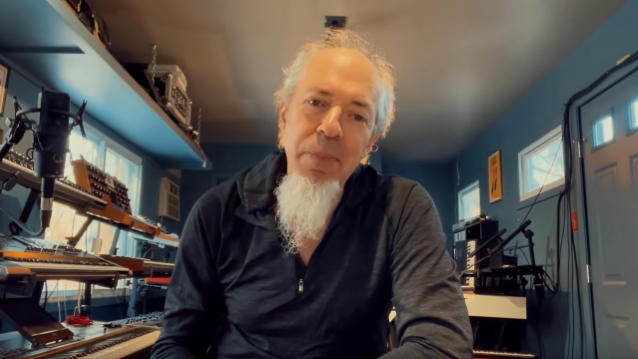 DREAM THEATER keyboardist Jordan Rudess has released the official music video for "I Surrender", a track from his latest solo album "A Chapter In Time".

Issued on March 12, "A Chapter In Time" was created as a musical reflection of a most unusual time in our history.

"I had this kind of musical diary that I was keeping during the whole beginning [and] middle of the lockdown, which was me basically going into my studio and working with these kind of trippy piano sounds and programming these ambient colors around the piano," Jordan told "The Guitar Hour" podcast. "And I was doing that a lot. It was really very cathartic for me. It was kind of helping me even just deal with my own feelings and everything like that. So after I got a whole bunch of those together, I thought, 'I should really release this as an album' — kind of like a marker of the time period. It's really just personal, if nothing else."

Regarding his decision to release the LP via Bandcamp, which supports artists and labels through revenue sharing of sales of a band's digital music, vinyl, t-shirt, or any other product listed on the web site, Rudess said: "The music business is just such a difficult place right now. It's so hard to make any money. It's crazy, and it's so sad. So I decided I would release it on Bandcamp so I would stand a chance to pay my expenses and maybe make a few bucks — instead of putting it out on Spotify and iTunes and Amazon, all the streaming services like that."

Rudess has been the full-time keyboardist with DREAM THEATER since the recording of 1999's "Metropolis Pt. 2: Scenes From A Memory". Beyond DREAM THEATER, he has released a number of acclaimed solo works and has also blazed a trail in helping to evolve the art and science of keyboard controllers. He created the successful app development company Wizdom Music, which has developed award-winning apps, including MorphWiz, which won the first-ever Billboard award for "Best Music Creation App". Wizdom Music has also built apps for Intel, Microsoft and RIM.