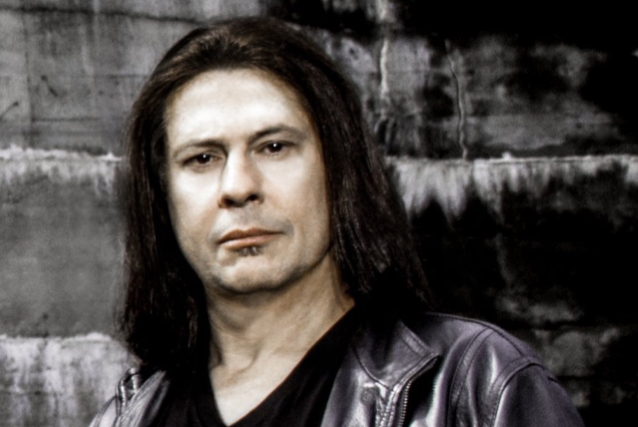 In a brand new interview with Prudential Center, DREAM THEATER drummer Mike Mangini spoke about how he is staying busy while the world is partially shut down to the ongoing coronavirus health crisis.

"With the band, this is a matter of getting online again, and I don't mean on the Internet," he said (see video below). "We have to get up and running. We had a tour [booked] — the rug was just pulled out from under us. So we have to readjust to this thing and figure out, how do you book a show if you can't book a show? Or a tour? I mean, it's a crazy, crazy thing. So we have to get back online. Personally, with this time… I wrote a couple of books that were very successful in the drum and music world, so I'm gonna make some videos to go along with that. I've also been working on a solo record for a while, but I'm doing mostly everything, so it's taken a lot of time. But I'm gonna take my time, and we'll see where that goes. What else? I'm practicing. I'm working on some techniques that I've never really taken the time to do. So I'm excited about that."

Mangini joined DREAM THEATER in late 2010 through a widely publicized audition following the departure of Mike Portnoy, who co-founded DREAM THEATER more than 30 years ago. Mangini beat out six other of the world's top drummers — Marco Minnemann, Virgil Donati, Aquiles Priester, Thomas Lang, Peter Wildoer and Derek Roddy — for the gig, a three-day process that was filmed for a documentary-style reality show called "The Spirit Carries On".

DREAM THEATER has spent the last year touring in support of its 14th studio album, "Distance Over Time", which was released in February 2019. The disc, which marks the first for the band's new label InsideOut Music, was produced by guitarist John Petrucci, mixed by Ben Grosse and mastered by Tom Baker.