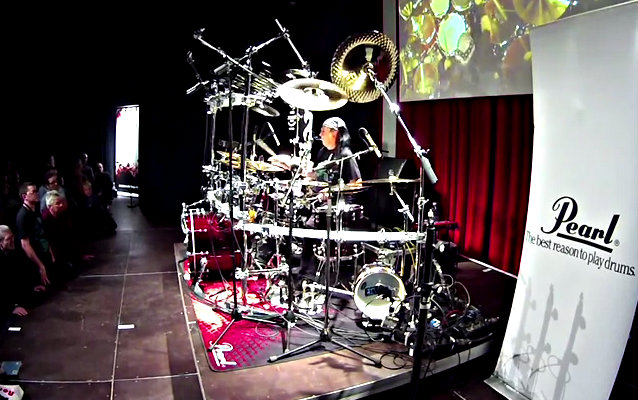 Mike Mangini of progressive metal giants DREAM THEATER has posted a slowly developing and slightly distorted-sounding drum solo clip. It is the first solo of the 2013 Mike Mangini Europe clinic tour. This one displays the testing, improvising and executing of the beginnings of the ideas used on the whole clinic tour. It contains probably the longest groove sections of Mike's solos where many ideas were developed without changing the main feel. 15/8 is the first one. It also has some impromptu sections due to equipment malfunctions… not failures. The gear had to be set up very, very quickly and for the first time, so the helpers and Mike forgot to check somethings. Some of the unplanned adjustments are one time things only played in this solo, so that is why it was posted.

In a recent interview with Myglobalmind, DREAM THEATER guitarist John Petrucci stated about Mangini: "We auditioned a lot of great drummers [back at the end of 2010]; every one of them was world-class. We had a lot of fun playing with each of them and had some great jams. With Mike, it was just something really special about what was going on. First and foremost, with everybody, we wanted to see if they can pull off the songs, play them correctly, and that they it felt right musically. That's something Mike did; it felt like the band. He really gets the style and delivers in a powerful metal way. He has all the techniques, chops and sensibility; everything just flows musically. Over and above that, there were a few things, like his attitude and dedication to wanting to get everything exactly right, as well as genuinely wanting the position. Not just wishy-washy, 'Yeah, if I get it, great. If not, OK too.' Personality wise, we are all kindred spirits. I've said this before; if we ever went to high school together, we would have been friends. He is just one of us. We felt that immediate connect. He the right fit on every level."