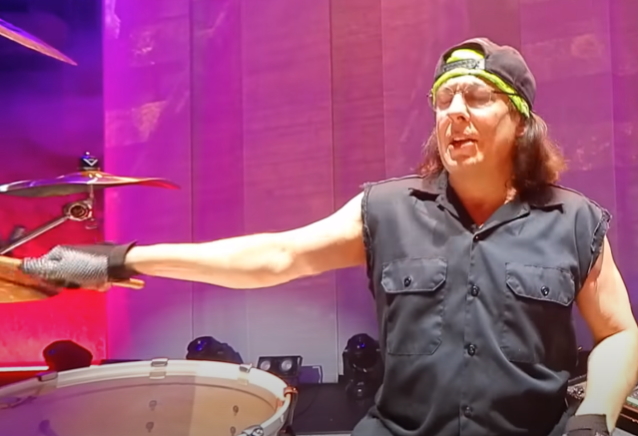 DREAM THEATER's Mike Mangini has shared a drum-cam performance video of the song "Bridges In The Sky" filmed at a show on the band's spring 2022 European tour. According to Mike, the clip is "chock full of imperfections and bad drummer faces, but it is the real sound in tone, rawness, groove, inflections, timing, pings, pongs, clicks, 'thwacks' and as always, drum hits specific to this show, this night."

Mangini beat out six other of the world's top drummers — Marco Minnemann, Virgil Donati, Aquiles Priester, Thomas Lang, Peter Wildoer and Derek Roddy — for the gig, a three-day process that was filmed for a documentary-style reality show called "The Spirit Carries On".

Three months ago, DREAM THEATER won its first-ever Grammy in the "Best Metal Performance" category in the pre-telecast ceremony at the 64th annual Grammy Awards, which was held at the MGM Grand Garden Arena in Las Vegas. DREAM THEATER was nominated for "The Alien", a track from its 2021 album "A View From The Top Of The World". DREAM THEATER's previous Grammy nominations were for the song "On The Backs Of Angels", from 2011's "A Dramatic Turn Of Events" album, and the single "The Enemy Inside" from 2013's "Dream Theater".