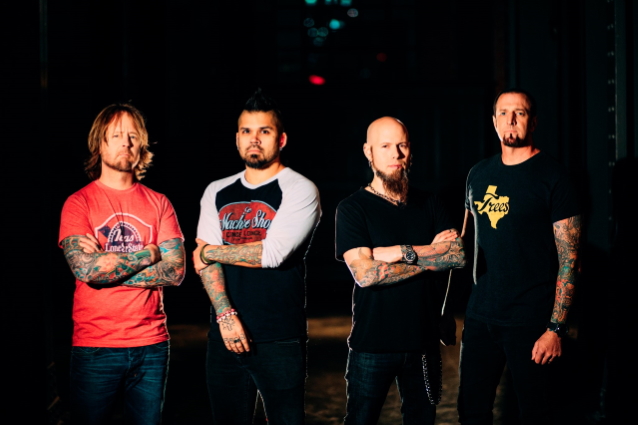 DROWNING POOL, ILL NIÑO and (HED)P.E. will join forces for the fall 2021 "Brothers In Arms" U.S. tour. Additional support on the trek will come from EVOLUTION EMPIRE.

DROWNING POOL vocalist Jasen Moreno said: "I'm grateful and excited, and looking forward to sharing stages with musicians that I admire, playing music that I've appreciated for years. I can't wait to be on the road with my guys again, and I'm eager to see all the fans again. Let's stay safe and sound."

Added DROWNING POOL guitarist C.J. Pierce: "DROWNING POOL have been friends and family with these guys for more than 20 years — we opened for (HED)P.E. before we were even signed, and we met ILL NIÑO on Ozzfest in 2002. When Dave Williams died, they hung our banner on their stage for the rest of the Ozzfest… Twenty years later, we're all still kicking and bringing new music to the table — and we're still brothers in arms."

(HED)P.E. frontman Jared Gomes commented: "Excited to be getting out on the road with DROWNING POOL and ILL NIÑO. I've known these guys personally since the beginning. We all came up together so it's nice to get back on the road with my brothers in arms. This tour is gonna f#@king destroy, so I wouldn't miss this run if I were you."

Back in December 2017, Pierce told the 97.1 The Eagle radio station that "everybody" in the group had "brought amazing material" during the songwriting phase for the band's next LP.

Asked how the material for the new disc compares to the songs on "Hellelujah", Pierce said: "It's just a continuation of that. I mean, it's rock and roll. There's a lot of different ideas, again, on the table, so it's coming together. Jay [vocalist Jasen Moreno] and Steve [bassist Stevie Benton] bring a lot of lyrics to the table as of late as well. I love the double meanings in everything that we have. We're getting deeper with the lyrics — deep tracks — so it's getting there. [We're] just evolving as a band, and it's monumental. This next record with Jasen, it's three records in [with the same singer] — the first time we've done that with anybody. So, obviously, we like Jay; he's gonna stay around."

DROWNING POOL played a number of shows in 2017 with singer Joey Duenas, formerly of the bands UNLOCO and ANEW REVOLUTION. Duenas was apparently filling in for Moreno, who was unable to make the dates for reasons that were not disclosed.

"Drowning Pool Strikes Back 2021 Tour"
We're looking forward to getting back on the road. Which show are you coming to?

Excited to be getting out on the road with Drowning Pool and Ill Nino. I've known these guys personally since the...