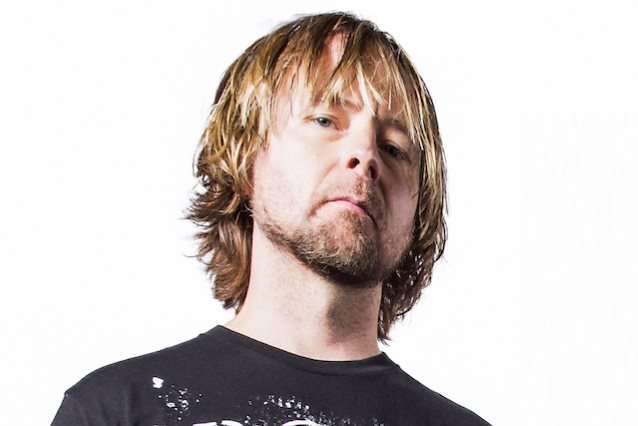 In a brand new interview with Meltdown Of Detroit's WRIF radio station, DROWNING POOL bassist Stevie Benton was asked for his opinion on the recent passings of LINKIN PARK's Chester Bennington and SOUNDGARDEN's Chris Cornell. He responded: "I didn't know Chris Cornell, even though I really wish I did, 'cause I was a huge, huge fan. But Chester, we did Ozzfest 2001 together, so we spent a lot of time hanging out. He never struck me as someone [who was suffering from] depression or anything [like that]. I guess people are like that — they put on a happy face, and that's the only face that I ever knew. The guy I knew was always just happy and chatting and just having a great time. I guess you just never know, man."

He continued: "When I heard [about Chester committing suicide], I had to call, like, ten mutual people that I knew — or maybe not ten, maybe five — because I couldn't believe that he actually did that. 'Cause it just wasn't the same person that I knew. It was so close to the same way it happened with Cornell, so close together, and I was, like, 'This has gotta be some kind of a Facebook hoax or something.' I was, like, 'This has gotta be some fake thing. There's no fucking way.'"

Asked if he kept in touch with Chester after they toured together on Ozzfest, Stevie said: "We had lots of occasions over the years where we were playing the same festivals. It's not like we ever went out and did a huge together after that, but I did see them at a lot of radio shows, a bunch of festivals in Europe, stuff like that, so I did see them quite a bit for a while, but it had been quite a long time. I can't even remember the last time that we hung out — I know it was in Europe somewhere, but I can't think of where. It's not like we were super-tight buddies and I could have been someone that he called up to unload on or tell his troubles to, so, in that way, I guess I am able to avoid some of the guilt that probably people close to him feel right now. If it was someone close to me that did that, I would feel guilty for the rest of my life, thinking, 'Man, why didn't I see it? Why didn't he tell me? Why didn't I ask?' So I feel really bad for his close friends and family."

DROWNING POOL's most recent performances featured vocalist Joey Duenas, who appears to have replaced the group's singer of the past five years, Jasen Moreno.

Duenas, formerly of the bands UNLOCO and ANEW REVOLUTION, made his live debut with DROWNING POOL on April 21 at the Rivers And Spires Festival in downtown Clarksville, Tennessee.

DROWNING POOL has not yet publicly commented on its latest singer change.