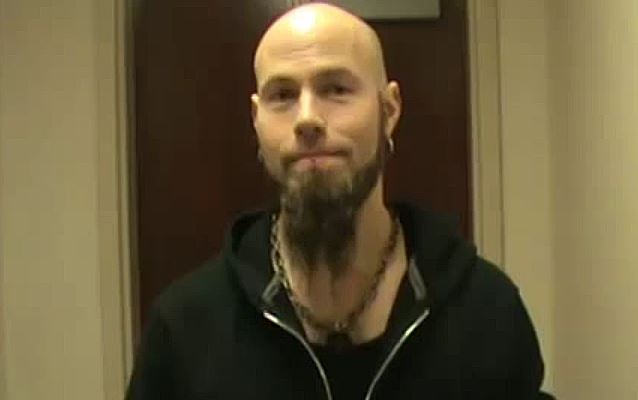 On November 11, Rustyn Rose of Metalholic.com conducted an interview with guitarist C.J. Pierce of Texas heavy rockers DROWNING POOL at the Knitting Factory in Boise, Idaho. You can now watch the chat below. A couple of excerpts follow (transcribed by BLABBERMOUTH.NET).

On whether DROWNING POOL is working on material for the follow-up to 2013's "Resilience":

"We have more songs written now than our entire back catalog. We have so many songs. [We're working on stuff] non-stop; in fact, in the dressing room today, I was working on some music. Now it's a matter of, what kind of record do we wanna make? We have heavier songs, lighter songs, some traditional-sounding DROWNING POOL songs, and we have what I call DROWNING POOL evolved songs. [Singer] Jasen's [Moreno] ideas are coming in as well. So I love them all, and we wanna get in there sooner than later — hopefully March or April at the latest — to record the next CD and then keep going."

On whether there are any plans for DROWNING POOL to release a new studio album:

"I keep pushing the acoustic record. We have tons of songs ready to [be played] acoustic style, and we have enough to put together probably two if we wanted to. And also on top [of that] [we have] new acoustic songs. And we sit around and do that a lot — in the back of the bus and every now and then we'll go to radio stations and we'll just goof off. So, yes, at some point there will be one. It's just a matter of time when we can get to it."

On his other band AS ABOVE / SO BELOW, also featuring C.J.'s brother Jacob Pierce:

"That came along naturally. My brother and I… my brother Jacob Pierce sings. We've always talked about doing a project together. And we tried this one thing called BROTHERS PIERCE we were working on for a little bit. But now we have time off, I do a lot of work with him, so I recorded the first demo. And Maxxx, the guitar player, fell and broke his wrist. And we just started booking some shows, so I filled in for him, and then started writing songs. And DROWNING POOL had some time off, so next thing you know, I'm writing songs and doing shows with AS ABOVE / SO BELOW. So I kind of came into it naturally. And it's fun for me, 'cause it's another outlet, and it's a different style of music, so it kind of allows me to do more things… There's only so much you can do with DROWNING POOL, and these guys, I love 'em, but it's a whole another ballgame over here, a whole different [bunch of] guys to play against and just a whole another vibe. On top of that, it's my brother, and it's a lot o fun to rock out with my bro there. So we have enough songs to do another record. That's another thing that's on my to-do list: an acoustic record, a DROWNING POOL record, an AS ABOVE / SO BELOW record.

"It's got a nice mix of stuff. Maxxx is a PANTERA fan like me, so it's got that metal vibe to it, but our drummer, Joey [Payow], does a lot of odd-timing stuff. DROWNING POOL is a straight-forward rock band, so it's fun to explore different time signatures and things like that in [AS ABOVE / SO BELOW]. And my brother and I sing together harmonies, and it seems to work; we have the same kind of tone. And it's fun to play in a band with another guitar player, since DROWNING POOL has always been a one-guitar-player band. So doing guitar harmonies and all that stuff, it's fun as well. So it's a different thing completely. But if you like DROWNING POOL, you're gonna love AS ABOVE / SO BELOW."