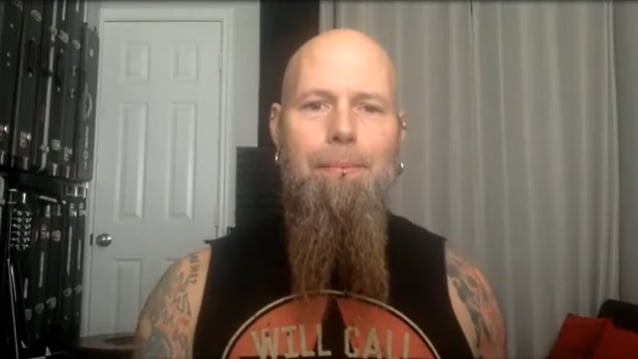 In a brand new interview with Knotfest.com's "Talk Toomey" podcast, DROWNING POOL guitarist C.J. Pierce said that he still marvels at the cultural impact of the band's song "Bodies". The lead single from DROWNING POOL's debut album, "Sinner", which came out in 2001, "Bodies" is the group's most popular track which has been featured in various films, TV programs and advertisements since its release. The song remained DROWNING POOL's highest charting single until "37 Stitches" premiered in fall of 2008.

"I have to say that was very unexpected," Pierce said (as transcribed by BLABBERMOUTH.NET). "I appreciate it and I love it. Every time it comes up, I crack up. I've seen some really funny, crazy renditions of that song.

"It was just a song that came along naturally," he explained. "We were rocking out in the room, drinking a couple of beers and writing what [we] feel. And the song 'Bodies' just took on a life of its own, man, and it keeps coming up and getting used for different stuff. It's the 'Jelly Of The Month Club'; it's the gift that keeps giving."

When asked if DROWNING POOL has ever received an offer to put "Bodies" in a commercial in a way that he and his bandmates deemed inappropriate, Pierce said: "It's been in a few movies, which has been great. It's been used in some promotional stuff. Never really any commercials like 'let the bodies hit the floor,' 'Hey, the clothes are dirty. Wash 'em.' I wouldn't say no to that. It [would be] kind of funny. But just what everybody knows, what's out there — mostly just people having their own fun with the song."

He continued: "To be honest with you, man, I'll sit around the house. I don't know if other artists do this. I know some artists get weird about their single or what they're known for, and they're, like, 'Oh, I hate that song. I don't wanna play it live anymore,' which is nuts to me. I love playing that song; I can't wait to get to it. But I'll sit around the house myself and I'll bust out… I've got the mandolin over here and I'll do just like a mandolin version of 'Bodies'. I'll do my own wacky versions of it 'cause it's just a fun song to mess with.

"It's still making new fans," C.J. added. "People come up [to me and say], 'Oh, man, I just heard that song 'Bodies' for the first time.' [I'm, like] 'You just heard it just now?' But it's cool that it keeps going. Obviously, we have other songs and other records, but I love that song. I can't believe how far it's come and how it keeps going."

"Bodies" was reportedly used by interrogators at the Guantanamo Bay detention camps in 2003. It was repeatedly played over a 10 days period to "stress" Mohamedou Ould Slahi during interrogations while he was "exposed to variable lighting patterns" at the same time.

Three months ago, DROWNING POOL announced that its fall 2021 "Brothers In Arms" U.S. tour with ILL NIÑO and (HED)P.E. was being rescheduled for early 2022. The trek was scheduled to kick off on September 29 in Abilene, Texas and conclude on November 3 in Hidalgo, Texas.