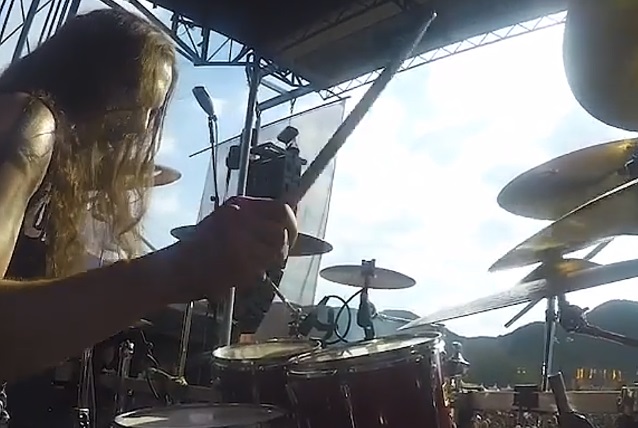 Drum-cam footage of drummer Jon Rice performing "Massive Cauldron Of Chaos" with Norwegian black metallers 1349 at Ozzfest Meets Knotfest, which was held November 4-5 in Devore, California, can be viewed below. Rice often serves as a stand-in for regular drummer Frost (real name: Kjetil-Vidar Haraldstad) when his obligations with his main band SATYRICON prevent him from performing with 1349.

One of extreme metal's most in-demand young drummers, Rice got his start with Pittsburgh thrashers CROWN THE LOST before joining JOB FOR A COWBOY in 2006. Rice played on JOB FOR A COWBOY's "Ruination" and "Demonocracy" albums before leaving to join Austin rockers SCORPION CHILD in 2013, where he provided drums on 2016's "Acid Roulette". Rice has also done touring stints with ABIGAIL WILLIAMS, THE RED CHORD, REVOCATION and SIRENIA.

1349 recently signed a worldwide deal with Season Of Mist. Their most recent studio album, "Massive Cauldron of Chaos", was released in 2014.