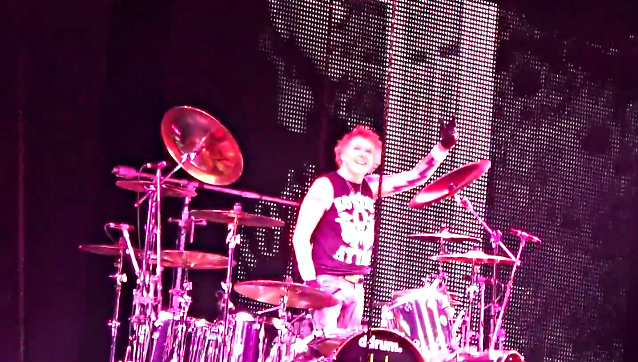 SCORPIONS' American drummer James Kottak has rejoined the band on the road eight months after he spent a month in a Dubai, United Arab Emirates jail in April for insulting Islam.

Kottak, who has been receiving treatment for alcohol abuse, released a statement in early June in which he said "this entire incident caused me to realize that it is time to stop drinking once and for all so that I can become the father, musician, and friend that I know I can be."

SCORPIONS vocalist Klaus Meine told the SCORPIONS French fan club Crazyscorps in October about Kottak: "With James, you know, when he went through this unfortunate incident in Dubai earlier this year, we said, 'At this point, it's good if you take a break. Not so much for us, but for yourself. And not so much being the drummer of the SCORPIONS, but for yourself being a family man. And you should go into rehab and don't think about anything else but just try to clean out yourself and come back the same James we know for so many years that's been not only our drummer, but also our friend, and a great guy.' So, giving him that time, we played this whole stretch of shows this year with a great Swedish drummer, Johan Franzon. We just played very few shows this summer, this year. We played some unplugged shows here in Germany, and they were all great, they were all sold out, going to all the big arenas with this MTV project, with all those guest artists from Sweden and Greece; it was fantastic. And now, setting up next year, of course, we want James back, and we said to him, 'The door is open for you to come back. But first, it's up to you, and you have to take care about yourself, take it serious, go through a serious rehab, and then the door will be open for you.' And that's the case. And right now, James will play the drums on the new album — the recordings will take place in Stockholm coming up very soon — and I think James is doing everything to prepare himself to be in great shape and to be back next year for the tour."