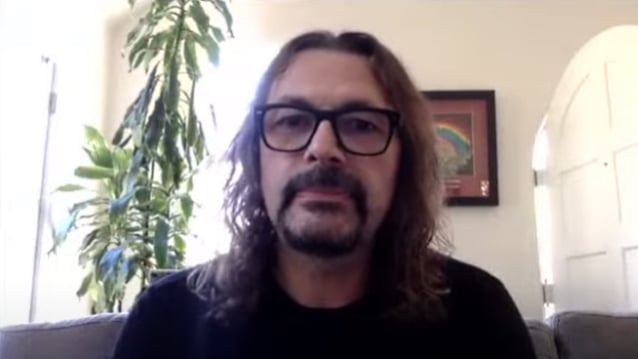 San Francisco Bay Area thrashers EXODUS were rejoined by drummer John Tempesta for their appearance on August 22 at Psycho Las Vegas at the Michelob ULTRA Arena in Las Vegas, Nevada. Tempesta was filling in for EXODUS's regular drummer Tom Hunting who recently underwent a successful total gastrectomy in his battle with squamous cell carcinoma (SCC) of the stomach.

John discussed his temporary return to EXODUS in a new interview with DEATH ANGEL's Ted Aguilar as part of the "Alive & Streaming" YouTube series. Speaking about the Psycho Las Vegas concert, Tempesta said (as transcribed by BLABBERMOUTH.NET): "That was crazy, man. It was really exciting. I got a call from Tom Hunting. Like, 'Wow!' I go, 'Tom is calling me about drums or something.' I knew about the surgery. And we started talking. He goes, 'Hey, dude. We've got this gig coming up in Vegas. If I can walk, I can play, basically. There might be a chance I can't. Would you be able to do it?' I'm, like, 'Woah!' He caught me off guard. I'm, like, 'Wow, man!' First of all, it was an honor to be asked by Tom Hunting; it was really nice of him. [I told him], 'I really appreciate it. But let me see what's happening with my band. Give me, like, a week, and I'll get back to you.' And I remember going to my buddy's house in Malibu the next day and listening to songs. I was excited. I'm, like, 'I can do this. I can do this.' And I called Tom [and told him], 'I can fucking do this, man.' So, I just started listening and listening and everything.

"It was a bit nerve-racking," John continued. "I put myself under a lot of pressure, 'cause I hadn't played in a while. Plus I hadn't played a show since December of 2019 — like, a whole, full live show. And to play this type of music again…

"Gary [Holt, EXODUS guitarist] came over. We jammed for a couple of days. He came over to my place. I have a rolling kit, and he borrowed an amp from my brother, and we just jammed and went through the songs. And it went great. And we jammed the next day for a bit. I'm, like, 'Yeah.' And then, the next following week, we had one rehearsal in Vegas, and that was it, with the full band, and got up and played. It was, like, 'What the hell happened?'"

When EXODUS first announced on August 16 that Tempesta was temporarily returning to the band, they said in a statement: "Due to Tom's continued recovery from his surgery, we are announcing that for our show in Vegas and Full Terror Assault, we will be joined by @johntempesta on drums! John was Tom's ( and our) number one choice to jump behind the kit in his absence, and John will kill it while Tom continues his recovery, which is going very well! Looking forward to seeing everyone who is coming to Vegas for the show. And looking forward to getting Tom healthy and back behind his kit as soon as possible! But let's welcome John back for two shows where he started!"

Hunting added at the time: "Hey Y'all. I'm 5 weeks out from the surgery and on the mend. I'm feeling stronger all the time and I'm beyond excited to get back to working out on the drums. Unfortunately I won't be ready for the upcoming Vegas and Full Terror Assault shows. Originally I thought if I could walk, I could play. I need to manage my own expectations, and then work my very core back into shape to be fully ready for action. I have no doubt I'll bounce back and get there. I wanna express my undying love and gratitude to our brother Johnny Tempesta for agreeing to play in my absence. I'm 100% sure he will crush playing this music! I'll check in again very soon. Thanks Soooo Much And CHEERS EVERYONE!!!!"

Due on November 19 via Nuclear Blast Records, "Persona Non Grata" will be the follow-up to 2014's "Blood In Blood Out", which was the San Francisco Bay Area thrashers' first release since the departure of the group's lead singer of nine years, Rob Dukes, and the return of Steve "Zetro" Souza, who previously fronted EXODUS from 1986 to 1993 and from 2002 to 2004.