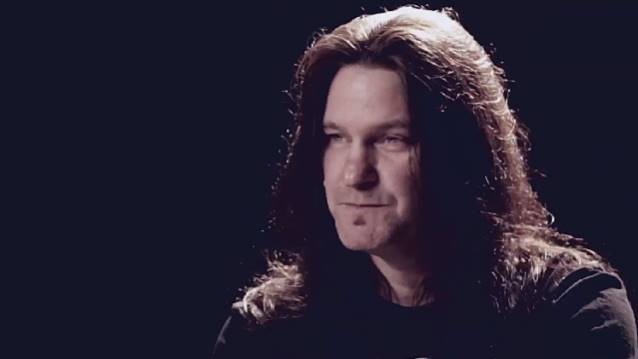 "After 10 years, I have decided to quit MEGADETH to pursue my own musical interests.

"I want to thank Dave Mustaine and the entire MEGADETH family, as well as thanking all the amazing MEGADETH fans around the world!!! I truly appreciate all of you.

"Stay tuned for info on my next musical journey."

During a January 2012 interview with Legendary Rock Interviews, Drover was asked to recount the very unusual story of how he joined MEGADETH. "It was 2004 and my brother Glen was in the band as their guitar player," Shawn said. "They were in rehearsals for their tour and I was in contact with him every day and checking on him and stuff and seeing how things were going.

"The situation just came up where they didn't want Nick [Menza, former drummer] in the band anymore, so I came home and my brother got hold of me and said, You better sit down.' And I was like, 'Why? What's going on?' And Glen was like, 'Well, they want you on the next plane to come out here.' [laughs] This was six days before the first day of the tour, so to be honest with you, that was quite a shock, you know, and I was just like, 'Jesus, man,' because I was well aware of when the tour was starting. So I called my wife and filled her in real quick and I was on a plane bound for Arizona a few hours later to rehearse with the band. We rehearsed for four days, travelled the fifth day, and the sixth day was the first show of the tour.

"It was quite a daunting task, but looking back now, I probably wouldn't want to do it any other way. It was pretty cool and I really didn't have time to freak out or be nervous or anything like that. I was so focused on learning the songs that I didn't know yet, they had just put out 'The System Has Failed' and I hadn't heard a note of it at all because it was just released. I tried to learn and cram as much material as I could in those four days of rehearsal.

"The first show was in front of thousands of kids and was off the hook; it was a great show. It's funny, because for some reason, the barricades weren't up at that venue and the kids were jumping all over the stage and going crazy. I guess nobody remembered to, or whatever, so it turned into an old-school MEGADETH thrash show with kids stagediving and the whole bit, so I thought that was how it was going to be all the time, which was fine by me, you know, because I am definitely from that era. [laughs] Come to find out someone messed up and everyone was like, 'What happened to the barricade?' and I was like, 'Oh, OK….' [laughs] It was pretty funny and I have a lot of fond memories of that time. It was nerve-wracking, of course, but it was so exciting and I was just so focused on learning that it kind of all worked out."