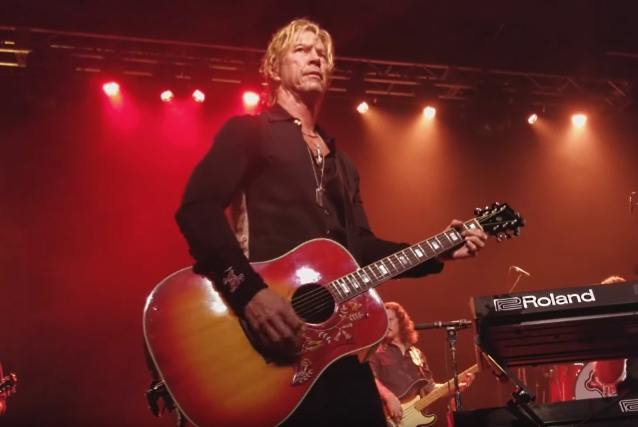 GUNS N' ROSES bassist Duff McKagan kicked off a two-week North American solo tour last night (Thursday, May 30) in Philadelphia. McKagan is touring in support of his newly released solo album, "Tenderness", which sees him reflecting on his experiences traveling the globe over two and a half years on GUNS N' ROSES' "Not In This Lifetime" tour. Backing McKagan on the trek is Shooter Jennings, who produced the LP, and members of Shooter's band.

Fan-filmed video footage of the Philadelphia concert can be seen below.

McKagan and Jennings began recording "Tenderness" more than a year ago, working out of Station House studios, located in Echo Park, California, where they wrote and recorded in-between McKagan's tour with seminal rock band GUNS N' ROSES and the release of Jennings's eponymous album, "Shooter". "Tenderness" features Jennings and his band along with appearances by The Waters and The Suicide Horn Section (which features Duff's brother Matt McKagan on trombone), amongst others.

McKagan told Billboard about the musical direction of "Tenderness": "I've been dabbling with this kind of songwriting for the last 20 years. I'm good friends with guys like Mark Lanegan and Greg Dulli, and both of those guys have influenced me tremendously. The thing is right now we have this huge rock band going [with GUNS], so I don't feel the need to peel off a rock record right now. It is the perfect time for me to do a record of whatever the fuck I want. I mean, I could have done it at any time. I've done a bunch of cool stuff in the past like WALKING PAPERS and the NEUROTIC OUTSIDERS, but it was more like aggressive punk rock. For this one, though, I really took my time with Shooter to get the right arrangements and the right instrumentation. It didn't have to be perfect. I didn't want any part of this record to be perfect; I wanted it to be real."