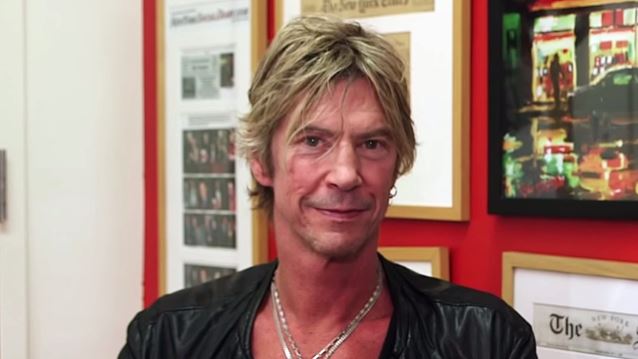 "Behind The Velvet Rope" host Arthur Kade (with the help of distribution partner Zonzia) recently conducted an interview with Duff McKagan (GUNS N' ROSES, VELVET REVOLVER, LOADED, WALKING PAPERS). You can now watch the chat below. A couple of excerpts follow (transcribed by BLABBERMOUTH.NET).

On whether he is aware of the enduring influence of GUNS N' ROSES' music almost thirty years after the release of the band's debut album, "Appetite For Destrution":

"It's dawning on me. The last few years, it's kind of hit me, like, 'Oh, yeah… I guess we…' We did something that people still really care about it. And maybe it's because my kids are teenagers and I see all their friends, and they're really into it — they're into the band I was in when I was just a little older than them. And it's 2015. So it's dawning on me that we made an impact, yeah."

On the current rock scene:

"I don't really have a comment on the state of rock today, because, frankly, I'm probably just too old to make a comment on it. I know what's genuine, and that can be rock, it can be R&B. I think Bruno Mars is awesome. I think that's genuine R&B. 'Uptown Funk' is the best R&B song in thirty years or something, maybe — since 'Little Red Corvette' [from Prince]. It's the best genuine R&B song that I've heard in a long time."

McKagan's second book, "How To Be A Man (And Other Illusions)", came out on May 12 and is the follow-up to his critically acclaimed New York Times best selling memoir, "It's So Easy (And Other Lies)".

The bassist released a three-song EP, also called "How To Be A Man". in conjunction with the book's publication. The title track featured former GUNS guitarist Izzy Stradlin and ALICE IN CHAINS axeman Jerry Cantrell.