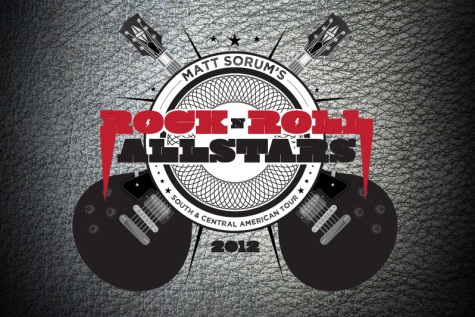 Comprised of musicians from some of the biggest bands in recent rock history, the Rock 'N' Roll Allstars is a live show unlike any before. Bandmembers include:

Promoter Gabe Reed hosted a press conference this past Thursday (March 1) at The Roxy Theatre in West Hollywood, California to officially announce the Rock 'N' Roll Allstars tour of South and Central America in April/May 2012. Also attending the press conference were Simmons, Sorum, McKagan, Clarke, Bach and Hughes, among others.

Commented Bach: "For me to be the singer in Gene Simmons' first-EVER side project is amazing to me! Dreams come true, indeed. If you would have told me when I was a boy that some day Gene Simmons, Glenn Hughes and myself would be in a band together, my reply would have been, No, we will not,' and I would have been wrong, haha!! See you soon Central and South America!! We are gonna rock the best of KISS, DEEP PURPLE, GUNS N' ROSES, SKID ROW and DEF LEPPARD! See you soon on tour!!!"

Check out video footage of Thursday's press conference below.

Despite the fact that he was previously announced as one of the musicians taking part in the Rock 'N' Roll Allstars tour, former METALLICA and VOIVOD bassist Jason Newsted will **NOT** be making an appearance at the event.