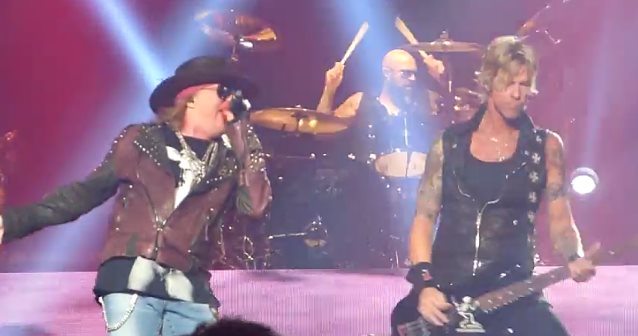 Ex-GUNS N' ROSES bassist Duff McKagan joined his former band on stage last night during the sixth show of their second Las Vegas residency, "No Trickery! An Evening Of Destruction", at The Joint at Hard Rock Hotel & Casino. McKagan stuck around for the group's entire set, which included such GN'R classics as "Welcome To The Jungle", "Sweet Child O' Mine" and "It's So Easy", as well as newer tracks "Chinese Democracy" and "Better". Check out fan-filmed video clips below.

There are three shows remaining in GN'R's Vegas residency: June 4, 6 and 7.

Rose recently spoke to Revolver magazine about his reunion with McKagan, who previously filled in for current GN'R bassist Tommy Stinson during the group's South American tour because Stinson went back to THE REPLACEMENTS for two high-profile dates at Coachella.

"It went really well," Axl said. "[Duff] worked really hard on the parts, and he liked playing the newer songs from 'Chinese'. And, you know, it's pretty funny because we'd go to talk about certain things from 'Use Your Illusion', and there's things he doesn't remember, there's things I don't remember. We kind of finish some of each other's memories sometimes. And the Duff that played these shows with us isn't really the Duff that I knew from what I'd call 'old GUNS' or the 'Appetite For Destruction' lineup or the 'Illusion' lineup. Because with this band, with this lineup, everybody goes out and tries to do their very best, and every guy's on. I don't have to tell the other guys what to do or anything, they do it on their own. They push each other really, really hard. That also pushed Duff, and he liked the challenge of that. And he got along with the guys really well. He and some of the band and crew were doing their yoga together during the days we were out there, so…"

Asked if he thinks he and Duff will do more work together, Axl said: "It's possible. I don't know yet. It depends on scheduling, or what shows Tommy wants to do with THE REPLACEMENTS and stuff like that. And you know, almost everybody in the band has some kind of issue going on, personally. There's people who have lost family members. Other people are dealing with separations. Sometimes court gets in the way. Real life!"

McKagan joined GUNS 'N ROSES onstage for the first time in 17 years at an October 2010 concert in London. He also performed with the current version of GUNS in December 2011 at shows in Vancouver and Seattle. All three appearances were for a few songs, not full gigs.

This past April's South American shows marked the first time Duff has played full concerts with the band since his departure in 1994.