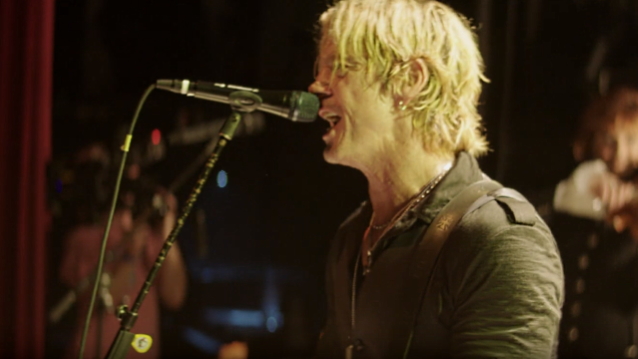 DUFF MCKAGAN Releases Music Video For 'Don't Look Behind You'

GUNS N' ROSES bassist Duff McKagan has released a concert video for "Don't Look Behind You", captured during his recent sold-out show at the El Rey Theatre in Los Angeles.

"Don't Look Behind You" is featured on McKagan's critically acclaimed new solo album "Tenderness", which debuted at No. 1 on Billboard's Heatseekers chart.

Produced by and featuring Grammy winner Shooter Jennings, the critically acclaimed album drew accolades from Entertainment Weekly, Spin, Consequence Of Sound, Chicago Tribune, LA Weekly, Guitar Player and many more, including Rolling Stone, which praised the album for being "more country-sounding than some mainstream Nashville releases joining it on record-store shelves."

Backed by Jennings and his band, McKagan embarked on a headlining North American tour, playing to packed-house crowds across the country. He also performed on NPR's World Café, was honored by the Seattle Mariners with a "Duff McKagan Night" at T-Mobile Park and was featured at the Grammy Museum in downtown Los Angeles.

Now he's taking the show overseas for a European tour that kicks off August 22 in Poland.

"Tenderness" sees McKagan reflecting on his experiences traveling the globe over two and a half years on GUNS N' ROSES' "Not In This Lifetime" tour. Encountering heartbreak, anger, fear, confusion and divide on his travels during this tumultuous time in our world history, McKagan channeled a collective hurt into songs of monolithic power.

McKagan has also created a campaign that puts the album's themes into action and he’s inviting fans to join him in an effort to give support to organizations doing great work. Those include Seattle's Union Gospel Mission, 320 Changes Direction and To Write Love On Her Arms, among others.

His European tour, which features Jennings and his band opening the show and then backing McKagan, kicks off August 22 in Warsaw.