Bassist Duff McKagan (VELVET REVOLVER, LOADED, ex-GUNS N' ROSES) was interviewed this morning (Friday, December 12) by "The BJ Shea Morning Experience" on the Seattle station KISW 99.9 FM. A couple of excerpts from the chat follow below.

Duff: "I have, yeah. I think Axl [Rose, vocals] sounds amazing. You know, I'm glad he put out the record he wanted to put out and I think it's gonna be successful, him going out and touring. People have been talking how the record's doing. I think it's a longevity thing; it will do fine for him. And I wish him the best of luck."

On whether there is any truth to the rumors that Axl Rose tried to reunite the original GUNS N' ROSES lineup before the release of "Chinese Democracy":

Duff: "I think all of it's rumors. It makes for good, you know, talk around the water cooler, but I don't think much of it is based on any fact."

On whether there's been any communication between him and Axl and on the possibility of a future reunion of the original GUNS N' ROSES lineup:

Duff: "No, there has been no communication. I've grown up. There are so many other things that made me realize, in my life, that made me realize, 'Oh, you're an adult now,' you know? Petty things just go by the wayside. I don't really have time for any of that stuff anymore. As an adult, I see what you guys see. Like, OK, well, everybody is alive and perhaps one day. And if we did it, it would be a blast. It's not anything, by any means, that I sit around and wait for or hope for. If it happens, it happens, and if not, that's fine too."

DUFF MCKAGAN'S LOADED will perform at KISW's annual Holiday Hangover Ball, to be held tonight (Friday, December 12) at Showbox SoDo in Seattle, Washington. Original headliners SALIVA who were scheduled to play, have been forced to cancel due to an unexpected health scare of lead singer Josey Scott, and have been replaced by QUEENSRŸCHE. 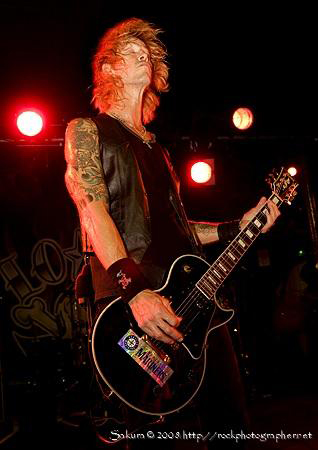