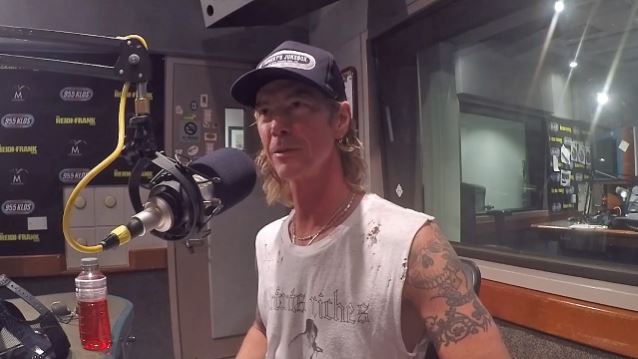 AC/DC postponed the last ten dates of its recent North American trek after singer Brian Johnson was advised to stop playing live or "risk total hearing loss." The band has since completed the European leg of its "Rock Or Bust" tour with the GUNS N' ROSES frontman as a "guest vocalist" and Johnson apparently not returning to the band at all.

McKagan, who is one-third of the reunited partial classic lineup of GUNS N' ROSES, got a chance to watch Rose and AC/DC play on June 4 at the The Stadium at London, England's Queen Elizabeth's Olympic Park. He talked about the experience during a June 17 appearance on "Jonesy's Jukebox". He said: "Me and [GUNS N' ROSES guitarist] Slash and our ladies went over to London just to surprise Axl and to see the AC/DC thing at the new Olympic stadium. And it was amazing."

He continued: "We went for a Saturday, basically. We had to get back… There was a graduation and there were things going on, so I had to take the 9:00 a.m. flight out Sunday morning. But we got to see him do that thing with AC/DC, and it was magical."

For the London gig, Rose was no longer confined to the chair he had been seated on ever since breaking his foot during a surprise GUNS club show in April 1 in Los Angeles. "He was out of his chair; he was up and cruising around," Duff said. "He was kicking the boot; he was doing the kicks. And it was really great to see… I'd never seen him, I guess, play… see him sing. And I think it energized the band — they were pretty energized — and the crowd was into it. It was cool. I'm super stoked for him."

Duff also talked about how Axl's injury has affected the vibe in the GN'R camp since the band's return was announced in January. He said: "It was just strange, the whole thing. [It was] our first show. [It happened during] the second song. He didn't complain once. That's the thing. We finished the show. He said, 'I think I broke my foot.' And sure enough, six pins later… And he didn't complain one time through that whole chair thing. So… I think everything happens for a reason. I think it drew us around… kind of drew us in tighter. And singing those kind of songs sitting down is a tough, tough deal. So, I think, yeah, he persevered."

AC/DC's European tour ended in Germany on June 15 and despite initial fan trepidation, Axl has gotten generally good reviews for his performances so far. AC/DC guitarist Angus Young said: "I mean, under the situation that we had, it was very good that he volunteered and said, 'Hey, if I can help, let me try.' So he's been very good. And he had to learn a lot of songs very quickly, and he's done a great job."

The rescheduled dates of AC/DC's North American tour — which will be the band's first concerts here with Rose on lead vocals — will kick off in Greensboro, North Carolina on August 27, just five days after Rose completes his summer stadium run with GUNS N' ROSES.