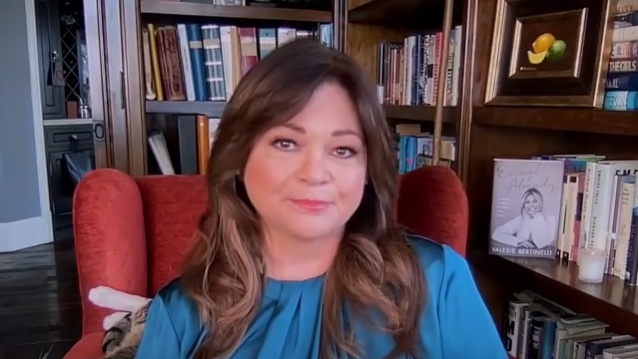 Eddie Van Halen's ex-wife Valerie Bertinelli has dismissed the long-standing belief among some fans that she contributed to the split of the original lineup of VAN HALEN.

Bertinelli, who has spent the last few weeks promoting her new book, "Enough Already: Learning To Love The Way I Am Today", opened up about her life with the legendary guitarist during an appearance on the "Literally! With Rob Lowe" podcast.

Speaking about what life was like after the pair began dating in late 1980 following their initial meeting backstage at a VAN HALEN concert, she said: "After Ed and I became involved, all of a sudden there was this rule that there was no girlfriends and no wives allowed on the road.

Bertinelli told Lowe that she hopes to eventually make peace with Roth, who recently announced his retirement.

When Lowe asked Bertinelli if Roth believed that she was the "Yoko Ono of VAN HALEN," a reference to the wife of THE BEATLES' John Lennon who is often blamed for the iconic British band's untimely split, Valerie said: "Well, I have been accused of that, even though Yoko didn't break up THE BEATLES, and I certainly didn't break up VAN HALEN."

In "Enough Already: Learning To Love The Way I Am Today", Valerie writes about saying goodbye to Eddie when the legendary guitarist died from cancer. She and their son, Wolfgang, 31, were by his side in his final moments.