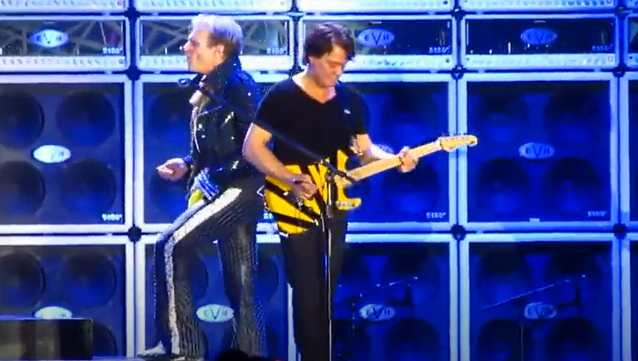 A Charvel EVH Art Series electric guitar which was played on stage and signed by iconic VAN HALEN guitarist Eddie Van Halen has gone up for auction at Iconic Auctions.

Eddie played the guitar during a VAN HALEN concert at Tacoma Dome, Washington on May 5, 2012 as part of the band's "A Different Kind Of Truth" tour. In addition to playing the guitar, Van Halen certified the guitar's usage with a bold silver pen marker signature and inscription on the body that reads: "Tacoma WA 5-5-2012, Eddie Van Halen, VH 2012."

Designed by the master himself, the Charvel EVH Art Series guitar is based on Eddie Van Halen's original Frankenstein guitar, which was the musician's attempt to merge the sound of a classic Gibson guitar with the physical attributes and tremolo bar functionality of a Fender Stratocaster. The striped finish was the result of Van Halen painting the guitar differing colors, applying strips of masking tape after each coat, and then peeling to reveal his Shelleyan monstrosity.

Video of Eddie Van Halen using the guitar for a live rendition of "I'll Wait" can be seen below.

Last December, Eddie Van Halen's son Wolfgangcriticized an auction of three of his late father's guitars. The instruments were sold for a total of $422,050 through Julien's Auctions as part of a larger music memorabilia event called "Icons & Idols". The 30-year-old said the sellers were "taking advantage of my father's passing", and he had "nothing to do with" the sale. "I don't EVER plan on selling any of my father's iconic guitars," he said.