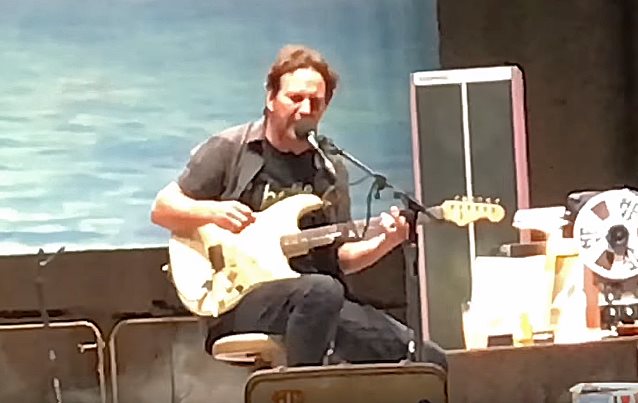 According to The Pulse Of Radio, PEARL JAM frontman Eddie Vedder delivered an emotional performance on Saturday night (May 27) when he opened a solo European tour in Amsterdam. Vedder reportedly never mentioned late SOUNDGARDEN singer Chris Cornell directly, but fans in attendance said that the death of one of his best friends was on Vedder's mind during the entire set.

At one point in the show, responding to a fan calling out, "I love you," Vedder told the crowd, "Thank you. I need it — we all need it. I'm thinking of a lot of people tonight. And some in particular and their families. And I just know that healing takes time, if it ever happens. It takes time, and that means you have to start somewhere. So let it be music. Let it be love and togetherness. And let it be Amsterdam."

A fan using the screen name Electro_UK wrote on the PearlJam.com forums, "The show was pretty much entirely about Chris without directly mentioning him. It was clear Eddie couldn't bring himself to talk about it head on. He spoke a little how the healing process can start with music and made numerous references to how sad he was and how much he and his friends were struggling."

Electro_UK added, "Frankly, it is the bravest performance I have ever seen. At times, it seemed like he was a word or two away from breaking into tears… On the outro to 'Sometimes', he cried out 'Where were you, dear God?' It was heartbreaking."

At one point in the show, Vedder covered the FUGAZI song "I'm So Tired", which features lyrics like this: "I'm so tired, sheep are counting me/No more struggle, no more energy/No more patient and you can write that down/It's all too crazy and I'm not sticking round."

A moment of silence was also observed before opening act Glen Hansard's set for the victims of last week's bombing in Manchester, England.

Vedder has not issued a public statement since Cornell's death on May 18, which was ruled a suicide. He was unable to attend Cornell's funeral on Friday (May 26) due to the start of his tour. Fellow PEARL JAM member Jeff Ament gave one of the eulogies at the funeral.