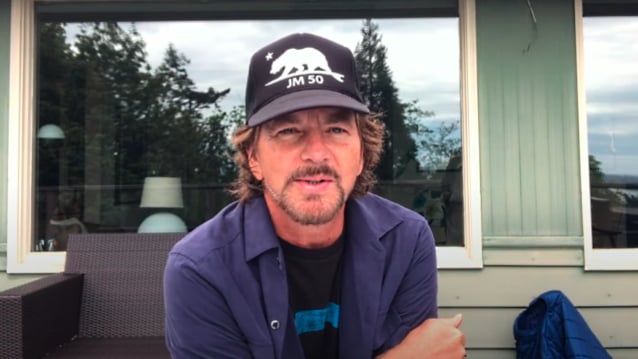 PEARL JAM frontman Eddie Vedder has accepted the "All In Challenge" to raise money for COVID-19 relief efforts, offering a special concert "birthday package" that includes opportunity to join the band on stage.

No matter when your birthday actually falls, you can join Vedder for a concert experience you'll never forget. You'll start the day off with a soundcheck, where you'll work with Eddie on the setlist for the night. Enjoy your view from good seats and then the soundboard for the first half of the show, and take your spot on the side of the stage for the second half. While you're up there, Eddie will put you to work as a crew member and also share a bottle from his personal red wine stash with you. You'll ultimately join Eddie and the band on stage for a "birthday" celebration, where the crowd will sing to you and you'll get to blow out the candles on your cake. After an unforgettable night, you'll take home your gift — your own Fender Telecaster guitar, signed by the Grammy Award-winning band.

For more information, and to get involved, visit allinchallenge.in/pearljam.

PEARL JAM's latest album, "Gigaton", was released on March 27 via Monkeywrench/Republic Records. Internationally, the LP was made available and distributed by Universal Music Group. Produced by Evans and PEARL JAM, "Gigaton" marks the band's first studio album since Grammy Award-winning "Lightning Bolt", which was released in October 2013.