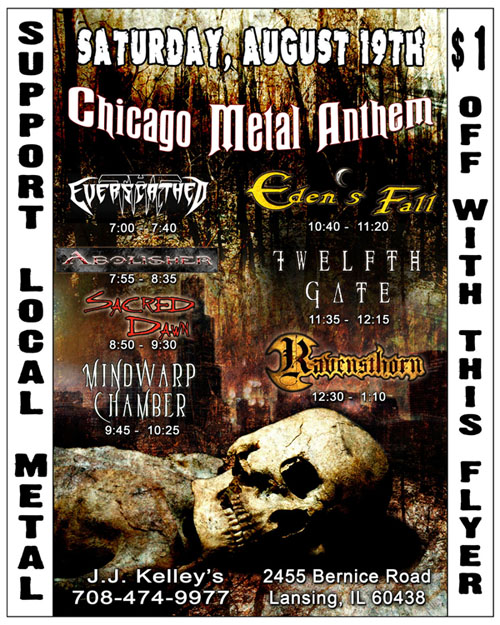 According to show promoter Ray Smith, "The Chicago metal scene features some of the most talented, hardworking yet underrated metal acts in the country. The purpose of Chicago Metal Anthem is to bring some of the best local bands together in one night to offer the fans an opportunity to see seven great bands perform back to back." Smith goes on to say, "This is the first installment of what will become an annual event. As opposed to bringing in bands from other states and countries, we want to focus on some of the incredible talent right here in Chicago."

In addition to the live show, Chicago Metal Anthem has plans to release period compilation CDs of Chicago-based metal bands to be distributed free-of-charge at local venues and music stores to bring attention to the Chicago metal scene. In addition, the live showcase will be filmed with multiple cameras to be edited and featured on the Chicago Metal Anthem 2006 DVD to be released next month via Nothingheart Records.

Cover charge is $10 at the door. A link to the official show flyer which is good for $1.00 off is available at this location.