"EDGUY have just returned from Belgrade [Serbia] where they have shot a video clip for the song 'Ministry Of Saints' from their forthcoming new studio album 'Tinnitus Sanctus', out on November 14th. As there will be no EP before the album release the video clip will be shown on this website during the next weeks."

The cover artwork for "Tinnitus Sanctus" can be viewed below. The CD was recorded at Gate Studios in Wolfsburg, Germany with producer Sascha Paeth.

In a recent interview, EDGUYfrontman Tobias Sammet stated about the group's new material, "We don't go back to the roots. We never denied who we are and where we come from, so I don't see a reason to go back to wherever. I go straight forward and follow my heart as I've always done, 'Tinnitus Sanctus' is exactly the music we wanna play, we are happy and I don't give a fuck if it's gonna be our biggest-selling album or not. It's so great, even if my career would go down the drain and this would be the last album, I'd be more than happy to be remembered as the guy who recorded 'Tinnitus Sanctus'. I'd rather ruin my carreer with a creative killer album like that than trying to play safe with a boring stereotype power metal stinker constructed on a drawing table. We have a couple of song titles such as 'Dragonfly', 'Dead Or Rock', 'Wake Up Dreaming Black' or 'Sex Fire Religion'. And we'll shoot a video for a very heavy midtempo anthem by the name of 'Ministry Of Saints'. And there'll be a bonus track called 'Aren't You A Little Pervert Too?' which is quite nasty." 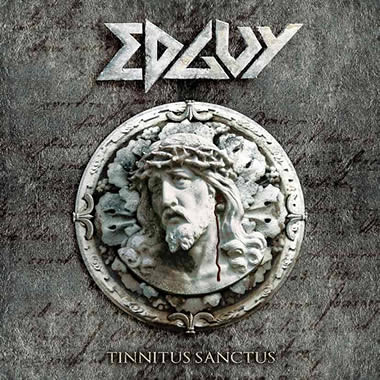