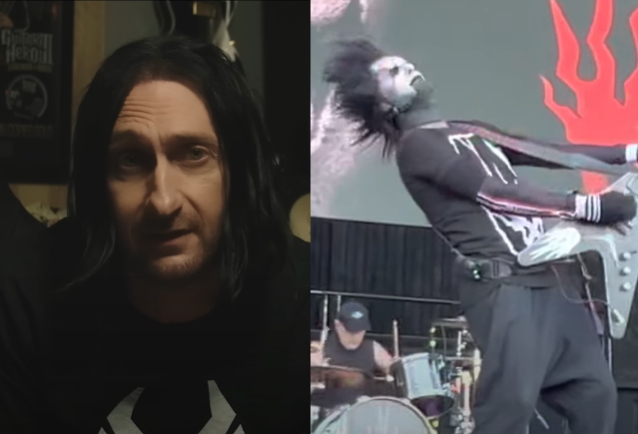 EDSEL DOPE: 'We Found A Very Unique Way To Allow STATIC-X To Continue To Live' As A Legacy Act

DOPE leader Edsel Dope, who is widely believed to be Xer0, the masked frontman of STATIC-X, spoke to the "Battleline Podcast" about what it has been like to have spent much of the last three years performing and touring alongside bassist Tony Campos, drummer Ken Jay and guitarist Koichi Fukuda. He said (as transcribed by BLABBERMOUTH.NET): "When Wayne [Static, STATIC-X frontman] passed away, let's just say that he wasn't on top. Let's just say that when me and him were playing those little club shows, he was struggling. And the fans knew it. And that's why he was playing to small crowds; people, in a lot of ways, had sort of checked out. But after us bringing STATIC-X back and doing that 20-year-anniversary memorial to Wayne Static and making [2020's] 'Project Regeneration' and releasing that album to people, I believe that he's on the minds and in the hearts of the fans more than he's ever been, and he's a legend in a different way. He went out not in the best, but we brought him back and we propped him up and made people remember him for the best of him, which was the work that he did in that nine years of STATIC-X. And then what he left behind for us to then help finish and to go out across the world and celebrate with his spirit and the fans and his family and the original 'Wisconsin Death Trip' band, it's pretty remarkable to think, like, if you were Wayne looking down and going, like, 'Dude, you mean to tell me that I died and three years later, my original band got back together, went on tour, didn't try to replace me with some new singer, didn't try to move on from me, but instead found a way to represent me and keep me involved in it and make the fans celebrate my legacy and remember Wayne Static.' While remembering STATIC-X, of course, because no one person was bigger than STATIC-X; it was an amazing recipe that four guys made, but we all recognize that Wayne was the engine of it. But if he was looking down at that, dude, you couldn't do anything except for be absolutely blown away and honored by the amount of love and admiration and the amount of work that myself and the band and his family put into orchestrating all that. And if you saw those shows, or even if you just find them online, the amount of production and time and money that was invested… Anybody saying, 'Oh, look at these guys with their cash grab,' it's, like, 'Bro, you wanna see the fucking bill from production and from touring?' This was not a bunch of guys going, 'Oh, we found our way to get to the top financially.' No. This was a way for us to go out and do something really fucking cool creatively, artistically that came from all the right places in our hearts. And I, as a huge STATIC-X fan, am grateful that it took place because I miss the band and I know the fans miss the band. And now STATIC-X is on tour with ROB fucking ZOMBIE and MUDVAYNE playing to 20 thousand people a night — right where they would be if Wayne was still here. And that's all you need to say. The music was bigger than everything else; the connection that the band had was bigger than anything else. And I think we found a very unique way to allow STATIC-X to continue to live while not making an attempt to move it into the future and exist on the future without Wayne. It's more about that it's a legacy act, and it always will be. And it's just a very creative way to allow the band to continue to be part of those big, cool experiences."

Back in October 2019, a photo was posted online clearly showing that Dope and Xer0 shared the same neck tattoo. However, Edsel later posted a lengthy statement on his band's Facebook page attempting to quash the rumors, implying Xer0's distinctive body ink was in fact a Photoshop job. Dope even provided a photograph of himself supposedly observing a STATIC-X performance sidestage to prove he and Xer0 were not the same person.

Two years ago, Campos discussed STATIC-X's comeback during an appearance on "The SDR Show". Speaking about how the idea of Xer0 wearing a mask in the likeness of Static came about, Tony said: "When we were trying to figure out how we were gonna do this live, the first thing that came up was the hologram thing, and that got shot down pretty quick.

Asked if STATIC-X was still keeping Xer0's identity a secret even though "everyone knows" who he is, Tony said: "Yeah, but I still like to keep that distinction, 'cause, again, I'm trying to keep the focus [on remembering Wayne]."