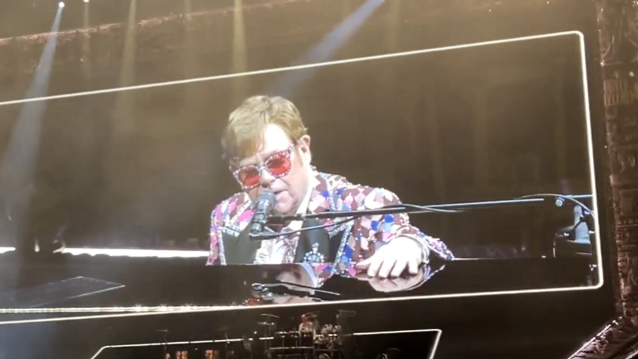 ELTON JOHN Pays Tribute To TAYLOR HAWKINS At Des Moines Concert: 'This Song Is For Him And His Family'

Elton John paid tribute to Taylor Hawkins during his concert in Des Moines, Iowa Saturday night (March 26),saying the late FOO FIGHTERS drummer was "one of the nicest people you could ever meet."

The 75-year-old pop/rock legend addressed Hawkins's tragic passing prior to launching into the song "Don't Let The Sun Go Down On Me" at the Wells Fargo Arena. He told the audience (as transcribed by BLABBERMOUTH.NET): "I got up this morning to see that Taylor Hawkins from the FOO FIGHTERS had passed away, and I was so shocked because he played on my 'Lockdown Sessions' album and he was one of the nicest people you could ever meet and one of the greatest drummers and a true musician who loved all sorts of music and loved life. And it seems so sad that at 50 years of age we've lost someone who had that much passion. And it makes me so downhearted for his family — his three children and his wife and his other relatives — and, of course, the FOO FIGHTERS who've lost a dearest loved one that can never, ever be replaced. But his music will live on. But I can tell you he was a great, great one. So this song is for him and his family and his wife and his children."

Hawkins died at a hotel in Bogota, Colombia on Friday (March 25). Local officials said an ambulance was sent to the hotel after a man reported having chest pains. He did not respond to resuscitation efforts and was declared dead, the city's health department said.