END OF GREEN Frontman To Guest On New ELIS Album

Commented ELIS singer Sandra Schleret: "During the vocal pre-production of 'Warrior's Tale', I always was thinking of a sad, fragile, though very strong, low-pitched voice, to give the lyrics the right feeling to unfold their meaning. When I was visiting our producer Alex Krull some weeks ago, we talked about that it would be great to do the song as a duet. When we were thinking about who would have such a special voice, Michelle was our first choice. We asked him, and fortunately he told us that he would like to do the song. Recording with him was great fun, he gave a lot of power and profundity to the lines. We all are very excited about the result, and happy that we found the right man for it."

"Catharsis" is scheduled for release in early 2009 via Napalm Records. The follow-up to 2006's "Griefshire" was recorded at Mastersound Studio in Germany with producer Alex Krull (ATROCITY, LEAVES' EYES) and marks the band's first full-length recording with Sandra Schleret, who joined ELIS in December 2006.

Commented Sandra: "Sometime ago, shortly before I joined ELIS, I had to go through a very hard time, physical-wise the hardest experience in my life. I was fighting against a severe disease, and while my body was struggling, I felt my soul started to go its own way. I came to new insights, and started to develop a very intense strength like I never would have imagined I would be able to, but which was really essential for me at that time. I was taken out of the 'real life' for about half a year and felt like an onlooker, not participating in the real world. With the stories I tell on 'Catharsis', I am kind of digesting this period in my life, sharing my feelings, fears and also the things I saw as an 'outcast' watching the world. The word 'catharsis' has some different meanings, but for me it represents 'the healing of the soul by going through tragedy.' As I see it now, to see how magic life can be I also had to experience its dark side..."

ELIS released a single, "Show Me the Way", on November 2, 2007 in Europe and November 6, 2007 in North America via Napalm Records. The single's title cut, which originally appeared on 2006's "Griefshire" album, features lead vocals by Schleret. Also included on the single are several previously unreleased songs from the "Griefshire" recording sessions.

ELIS' previous vocalist, Sabine Dünser, suffered a cerebral hemorrhage on July 7, 2006 during rehearsal and passed away the following day in hospital.

"Griefshire" was released in Europe on November 24, 2006 via Napalm Records (the U.S. received the album on January 16). The recordings for the CD were completed prior to the death of Dünser, who came up with the original concept for the album.

The follow-up to 2004's "Dark Clouds in a Perfect Sky", "Griefshire" was completed at Mastersound Studios in Stuttgart with producer Alexander Krull (ATROCITY, LEAVES' EYES). 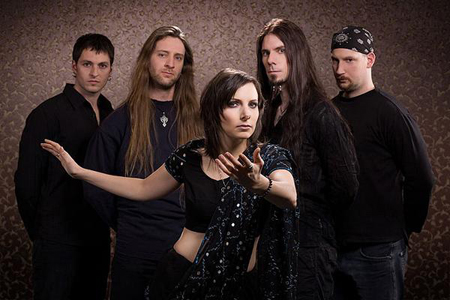