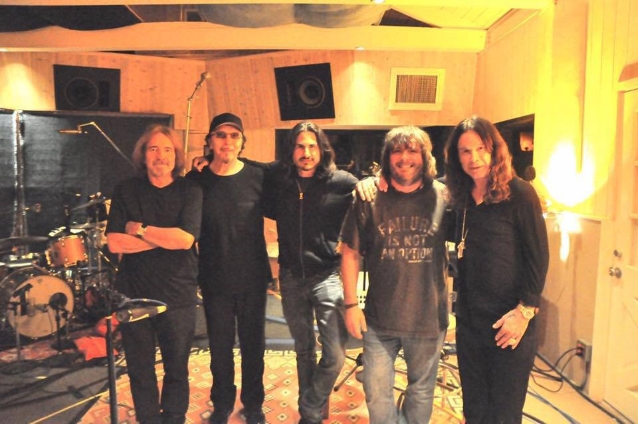 Engineer, producer and musician Mike Exeterrecently spoke to Australia's "The Void With Christina" about his work on BLACK SABBATH's reunion album, "13". The first SABBATH effort in 35 years to feature founding members Ozzy Osbourne, Tony Iommi and Geezer Butler was written over an 18-month period at Tony's home, Ozzy's house and Angelic Studios in Northampton, England before recording sessions began at Shangri-La studio in Malibu with producer Rick Rubin.

"[Tony and I] got into a routine where we would start putting ideas down [in the studio]," Mike recalled about the early songwriting sessions that resulted in "13" (hear audio below). "Because he doesn't wanna play people stuff off his phone; he wants to have a catalog of songs. So we would start putting ideas down and come up with a drum pattern that would maybe suit a specific riff that we thought might be worth looking at. And then I'd throw some bass on, I'd program the drums, and maybe we'd put some keyboards or orchestration. And a main riff or a song might come out of one of those moments. And over a period of maybe two days in a week, we'd develop those and we'd maybe go, 'It's just a riff. Let's put it down and just call that a day.' Or it might turn into a song. Always with the idea that a singer's come along and do their best with it. So what might feel like a verse riff to somebody could be a chorus or anything to someone else. So this would go on. And the real first thing that was born out of that was the HEAVEN & HELL album ['The Devil You Know'] with Ronnie [James Dio], and that then developed into writing sessions and things like that. So, when we got to the SABBATH album, '13', we knew Ozzy was gonna come and have a listen to some ideas. And he came up just after Christmas 2010. We played him an hour and a half's worth of stuff, and that was only half of what we got prepared that was relevant to what Ozzy would sing. Because we got stuff that wouldn't be right for Ozzy, 'cause Tony kind of knew what Ozzy liked."

Asked if Tony writes music with a specific singer in mind, Mike said: "He writes for himself, but he knows it's not precious, and he'll change a riff if a singer needs him to. It was quite interesting. The dynamic between him and Ronnie was probably the masterclass of my life, because knowing their history, it was quite interesting watching them really concentrating on doing as much as possible to make the other one feel at ease. 'Cause they've had a pretty acrimonious fallout over the years, and they'd come back together, and it was so lovely — the feeling was always good. So they were constantly pushing each other, and it was always, like, 'Oh, do you mind if I change this chord? Will that affect you?' 'No, no. I can sing that.' Or, 'I've come up with this idea. Do you think that affects what you've played?' And Geezer would always be there in the middle, going, 'I really like that. That's good.' Or, 'How about we try that?' So it was this lovely, quiet environment. And the same thing was happening with '13'."

According to Exeter, two years passed between SABBATH's first meeting with Rubin and the completion of "13". "It only took that long because Tony was diagnosed with cancer halfway through," he explained. "We would have been recording a year earlier if his diagnosis hadn't come through. But that gave the whole project time to develop. [The members of SABBATH] got to really know each other again as a working relationship. Because they hadn't written together properly for years. They had a little stint after the reunion in '99-2000, but that didn't really go anywhere."

Drummer Bill Ward the only founding SABBATH member to sit out the record and world tour.

SABBATH used Ozzy's regular touring drummer Tommy Clufetos since then for live work. RAGE AGAINST THE MACHINE's Brad Wilk laid down the drum tracks on "13", which came out in June 2013.