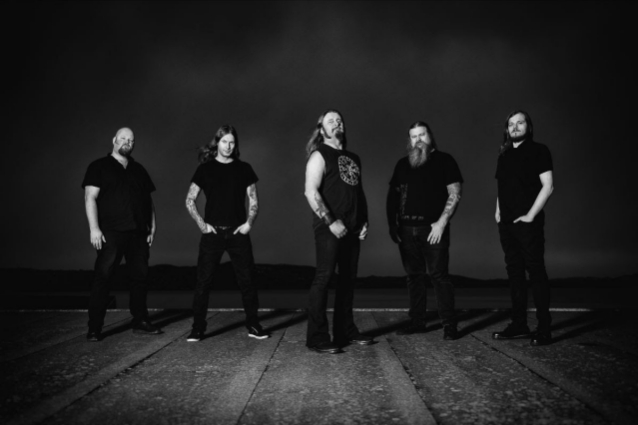 Norway's avantgarde metal heroes ENSLAVED have released the official music video for their new single, "Homebound". The song is taken from the band's upcoming album, "Utgard", due in the fall via Nuclear Blast.

ENSLAVED will release "Homebound" as a limited-edition seven-inch vinyl, limited to 500 pieces, on June 26. The single title cut will be backed by a cover of the TNT song "Knights Of The Thunder".

The band states: "'Homebound' is about the greatest reward of exploring and travelling into unknown territory — to "go viking" if you will, turning homebound at the end of the journey. It is a song that takes ENSLAVED on a musical journey that is as much an homage to those who dared so we could play our very own style of music: from nurturing blackened roots to nodding at zeppelins in the sky, beholding teutonic thrash titans and watching speeding motorpsychos take off into the futures."

Regarding the "Utgard" album title, the band commented: "'Utgard' bears countless meanings to us; an image, metaphor, an esoteric 'location', a word on its own, etc. — on different levels and layers. From Norse mythology we know it as a landscape were the giants roam; where the gods of Asgard have no control; dangerous, chaotic, uncontrollable and where madness, creativeness, humor and chaos dwells.

"The album is a journey into and through 'Utgard'. It is a place of unification of that which is above and that which lies below. It is not about avoiding fear of the pitch-black darkness (it will keep on growing until the next confrontation),but to go into the darkness itself. This is the rebirth of the individual. In a world that has become so obsessed with the false lights of greed, jealousy and egotism this is a necessary journey.

"'Utgard' is not a fairytale, it is a vital part of both your mind and your surroundings, and it has been since the dawn of mankind. Acknowledging that this realm exists and is a vital part of the self, has inspired us deeply since the early days of our lives. Enjoy our journey to the outer limits."

ENSLAVED unveiled the "Utgard" album cover in a social media post in March. The band stated: "This is the 9th consecutive album cover artwork done by Truls Espedal — and like the album itself it is definitely on the wavelength of the long-distance pulse from the ENSLAVED generator. It is a piece of art that mirrors a massive concept and a band that is also more lyrically and philosophically inspired than ever before. That Truls is a master of his art is established a long time ago, but he has truly outdone himself on this interpretation of our Utgard. Just looking at how the colors and techniques are used to create the depth and grandiosity of the horizon. The perfect travelling companion into these uncharted territories."