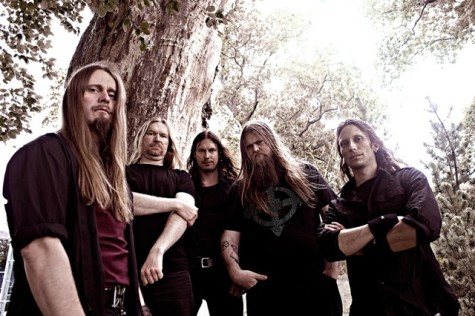 Progressive/psychedelic Norwegian black metallers ENSLAVED have inked a new worldwide deal with Nuclear Blast Records. The band's new album will be released in the fall.

Commented ENSLAVED: "We're very, very (yes, very) pleased and proud to sign this deal with Nuclear Blast worldwide. We've already worked with Nuclear Blast U.S. through our two latest albums; and our personal friendships with Nuclear Blast guys and gals on both sides of the Atlantic are even older. There's no drama — we take great pride in the fact that there seldom is with us — it is simply a matter of one contract ending, and us going for what seems to be our best option at this point in time and space. This time the best choice for ENSLAVED is changing things up somewhat. We're excited to see what the mixture of passion and professionalism at Nuclear Blast can do with the ENSLAVED name in the years to come. There is no doubt that the level of ambition, the experience and seriousness about what we do, form perfect common ground for ENSLAVED and Nuclear Blast. We're in the process of making a new album that will initiate our new partnership, watch out for the approaching wave of news about that. For now, let's just say that the album will be an absolute (Nuclear) blast!”

Added Gerardo Martínez, label manager of Nuclear Blast USA: "ENSLAVED is one of the most amazing bands to ever come from Norway. We've had the pleasure of working with them on their last two albums in North America, and from this day forth worldwide. Looking forward their new masterpiece to be unleashed to the masses later in the year!”

ENSLAVED were the recepients of last year's Norwegian Artists And Songwriters Association honorary award. The award was presented to the band by the Norwegian minister of culture Anniken Huitfeldt on October 31, 2011.

ENSLAVED last year released "The Sleeping Gods" via Scion A/V as a free downloadable five-song EP. Following up on 2010's near-universally praised "Axioma Ethica Odini", the EP found the quintet once again expanding the boundaries of what metal can be, deftly incorporating influences from across the musical spectrum. Mainly recorded in Solslottet Studio in Bergen, and partly in the band's own home studio, the effort finds the group sounding leaner and more confident than ever, part and parcel of maintaining a presence at the foreground of the international metal movement for 20 years.