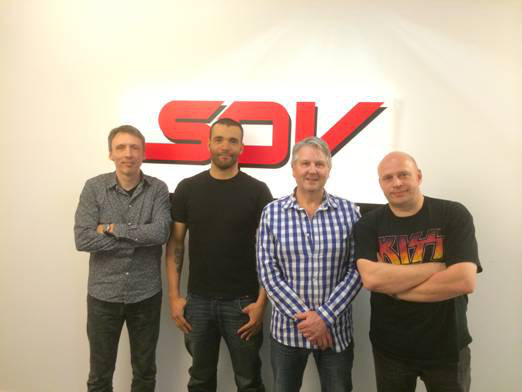 ENTOMBED Back Catalog To Be Reissued

Swedish rock label Threeman Recordings and German company SPV have entered into a distribution agreement for Europe and the USA to re-release of some essential ENTOMBED back-catalog items beginning with the band's classic albums "DCLXVI-To Ride, Shoot Straight And Speak Truth", "Same Difference" and "Uprising" in early 2015. Each album will come in a high-class casebound package with a bonus CD and 24-page booklet, including rare photos, liner notes and much more. In addition, each album will be released in a heavyweight 180-gram colored vinyl version.

Said Dave Thorne of Threeman Recordings: "It's great to finally find a home for the ENTOMBED back catalog, and I know that with their many years of experience, SPV is the perfect partner to handle these historic albums and really do them justice. The fans can expect nothing less than the highest quality from these and future releases!"

Added Frank Uhle of SPV: "ENTOMBED is one of the originators of the death metal genre and we are more than happy to be working with Threeman Recordings to maintain the history of this great band!"

"Back To The Front", the album that was recorded last year by four members of the most recent lineup of ENTOMBED — Lars Göran Petrov (vocals),Olle Dahlstedt (drums),Nico Elgstrand (guitar) and Victor Brandt (bass) — was released on August 5 via Century Media Records under the band name ENTOMBED A.D. The CD was recorded at Studio Bohus (ABBA, EUROPE) in Kungälv, Sweden with producer Roberto Laghi (IN FLAMES, HARDCORE SUPERSTAR). The cover artwork was painted by Zbigniew Bielak (WATAIN, VADER).

In a recent interview with Metal Underground, Elgstrand stated about the legal issues that forced the ENTOMBED name change: "We've had some internal turmoil that resulted in a separation of AlexENTOMBED belongs to him. Which, of course, it doesn't, but instead of getting into a lawsuit that would've gone on for a long time and wouldn't have made anyone happy except a bunch of lawyers, we decided to add 'A.D.' to the name and get on with what were supposed to do, which is making music and touring as a band. As of now, the name ENTOMBED is on hold for anyone to use until people involved come to a solution. Unfortunately, it doesn't seem to happen in the near future."