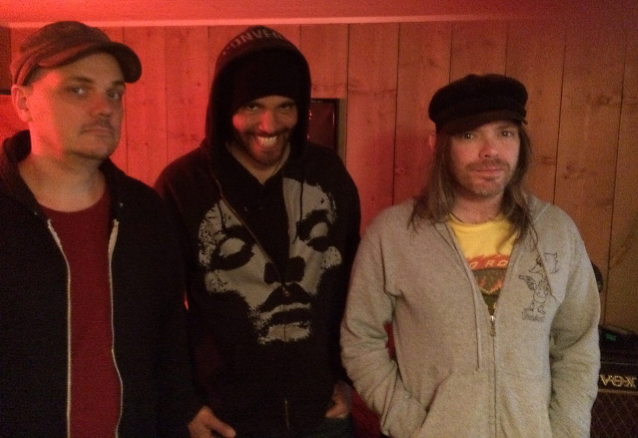 Legendary Swedish death metallers ENTOMBED will play "one exclusive show" at next year's edition of the Gefle Metal Festival, set to take place July 14-16, 2022 in Gävle, Sweden. The band says: "It will be quite special. See you there!"

ENTOMBED's lineup for the performance will include original members Alex Hellid (guitar),Uffe Cederlund (guitar) and Nicke Andersson (drums) plus former ENTOMBED bassist Jörgen Sandström, who previously played with the band between 1995 and 2004. There will also be guest appearances by other former ENTOMBED members and various well-known musicians.

Gefle Metal Festival festival general manager Chris Rotenius said in a statement: "Next year, it will be six years since the last time ENTOMBED was on a stage. Now we have managed to gather the core with Uffe, Alex, Nicke and Jörgen to create the perfect opportunity to perform a concert beyond the ordinary. At Gefle Metal Festival next summer you can expect a unique ENTOMBED gig. This is going to be a death metal evening you don't want to miss."

ENTOMBED's performance at Gefle Metal Festival will mark the band's first appearance since singer Lars-Göran "LG" Petrov died on March 7 after a battle with bile duct cancer. He was 49 years old.

"LG was a central figure in Swedish metal who left a huge void behind," Gefle Metal Festival CEO Edward Janson said. "When we started Gefle Metal Festival 2016, FIRESPAWN with LG was the very first band to play and at the last festival in 2019, he was on stage with his ENTOMBED A.D. In between, he was in attendance as an enthusiastic fan. It feels good to be able to pay tribute to LG and his contributions to metal with this concert."

Hellid, Cederlund and Andersson played the band's groundbreaking 1991 album, "Clandestine", in its entirety at Malmö Live in Malmö, Sweden in November 2016. Joining them at the show were Robert Andersson (vocals) and Nicke's half brother Edvin Aftonfalk (bass),both formerly of the Swedish death metal band MORBUS CHRON. Two weeks earlier, the most recent Hellid-led lineup of ENTOMBED made its live debut on the Close-Up Båten cruise.

Next summer we will take the stage at Gefle Metal Festival for one exclusive show. It will be quite special. See you there!

For tickets and info https://www.geflemetalfestival.se/