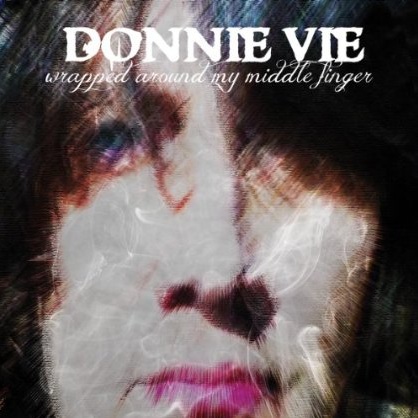 Donnie Vie — the songwriter and the voice behind ENUFF Z'NUFF — will release his new solo album, "Wrapped Around My Middle Finger", in Europe on March 5 via Livewire/Cargo Records.

Donnie consistently amazes with the quality of his output. Outgrowing the "BEATLES-esque" tag and the "glam" label many years ago, Donnie continues to deliver with a new found enthusiasm. Vocals, guitar, keyboards and much much more... a one-man powerhouse of a talent.

One of the most gifted yet underrated songwriters of our generation, Donnie Vie is best known as the main songwriter and voice of '90s pop sensations ENUFF Z'NUFF. Their Atlantic Records debut spawned the hits "Fly High Michelle" and "New Thing", regular favourites on MTV's "Dial MTV" and both of which charted in Billboard's Top 50. Over their 25-year career, ENUFF Z'NUFF has produced a discography of 16 international releases, been invited and played on "Late Night With David Letterman" (two times),become Howard Stern's favorite band and toured the world over and over again.

2012 brings us THE DONNIE VIE BAND, an ambitious quartet led by Mr. Vie. The group's live show sees them playing deep cuts from the entire ENUFF Z'NUFF catalogue, as well as songs from Donnie's solo releases.

The "Wrapped Around My Middle Finger" title track previously appeared on the "Kiss On This" Classic Rock magazine covermount CD.