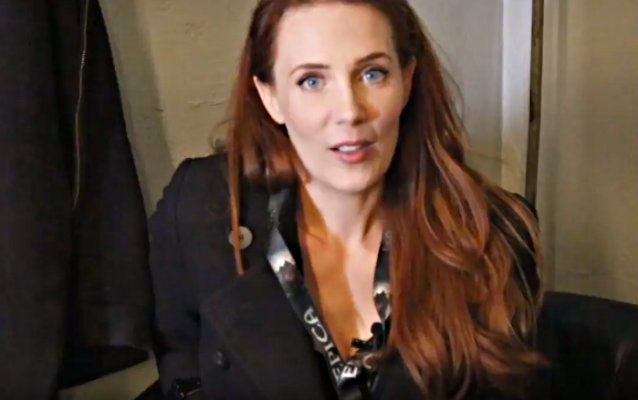 EPICA Frontwoman: 'It's A Majestic Feeling To Be Onstage With An Orchestra And Choir'

Musik Universe conducted an interview with frontwoman Simone Simons of Dutch symphonic metallers EPICA prior to the band's September 1 show with LACUNA COIL at Metropolis in Montreal, Quebec, Canada. You can watch the entire chat below. A few excerpts follow (transcribed by BLABBERMOUTH.NET).

Simone: "We have another North American tour, we have a European tour next year we are planning. We are planning another tour and some festivals, then it's time for us to write a new record again. Then the cycle has come to an end. But, we might say, 'Let's not put a deadline on a new record' and take our time when the record is done, it's done. We tour a lot. Sometimes it's good to have a little break. We love it. Recharging the batteries is very necessary. We don't run on electricity, we run on our beds, our families and friends. That's also important. Try to keep the balance in life. But we're doing so well and we're so happy. We worked hard for that. I think once in a while, everyone needs a holiday."

On whether EPICA will perform live with an orchestra again:

Simone: "A show with an orchestra, we've done a couple of times with the Hungarian orchestra, first for 'The Classical Conspiracy [Live In Miskolc, Hungary]' and then 'Retrospect', our ten-year anniversary. We love doing that. We have a new project coming up with the Metropole Orkest. It's a Finnish/Dutch orchestra where we're going to record an EPICA song. We're thinking about… we have big plans. We have a million plans, but we have to wait and see what will work out in the end, but we love to do that. Those shows, it's a lot of organization, the budget needs to be right and there's so much more that comes into creating a project like that, but it's always very rewarding because that's when the music is a hundred percent live and it's a majestic feeling to be onstage with an orchestra and choir."

On whether EPICA has plans for its fifteenth anniversary:

Simone: "It's not going to be like 'Retrospect'. Fifteen years is like ten years, twenty years… basically, EPICA was founded in 2002, so this basically is our fifteenth year. I think 'The Phantom Agony' was released in 2003. Officially, looking at the release, it would be 2018. But I honestly don't know. We're definitely going to do a show somewhere, but our management has all the ideas and we're touring non-stop, we're recording non-stop, we have another exciting project we've been working on the last couple of months, basically, the whole summer. That's going to be released next year, but I can't say too much about that."

On the ways she would like to grow as a musician:

Simone: "I sing in many different styles. In the past, it was mainly just classical and that evolved also through the years. I've worked with different teachers and I'm pretty happy where I'm at at this moment, but you can always learn. There's some band members that have musical history. They've studied music. I've taken singing lessons. The thing I could work on more is the musical theory stuff in order to understand more songwriting. I don't write songs myself. I can't. I write lyrics and vocal lines. That's something I would like to work on. My husband [KAMELOT keyboardist Oliver Palotai] is a piano player and he's already offered me free lessons, so I should accept in order to understand harmonies and all that stuff a little more. I have a feeling for it, but if you have knowledge of musical theory, that will come easier and you understand music language because that's also a thing. I know some basic stuff."