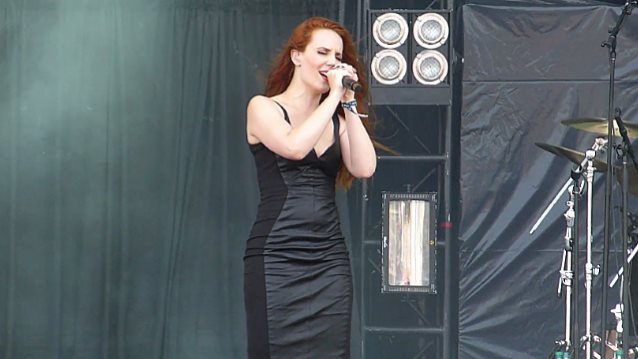 Dutch female-fronted symphonic metal band EPICA has been awarded the Buma ROCKS! Export Award. The Export Award is an annual award that is given out by Buma Cultuur to the Dutch artist which has had the most success abroad.

Buma Cultuur was founded as The Conamus Foundation in 1962 with the aim of furthering the work of Dutch music creators, promoting Dutch-penned material and encouraging the performance of Dutch popular music in the Netherlands and abroad.

Comments EPICA's Mark Jansen: "We are honored with this prestigious award. It's a big achievement after all those years of investing countless hours and much energy into EPICA. It shows that everything you do by following your heart will eventually pay off and will get acknowledged. Thanks to all our fans from all over the world!"

EPICA's Epic Metal Fest will take place on the November 22 at Klokgebouw in Eindhoven, The Netherlands. Headlining this event, EPICA will be joined by ELUVEITIE, FEAR FACTORY (20th-anniversary "Demanufacture" show),MOONSPELL, DELAIN and PERIPHERY, with more bands to be announced.

Simone Simons, EPICA's frontwoman, states: "It was a long-cherished dream of EPICA to host our own festival and we are very proud to be able to present an absolute awesome array of international metal acts. This day will surely be the next highlight in our career and we hope to be able to share it with all of you!"

It will mark the band's return to the Klokgebouw after their 10th-anniversary "Retrospect" show, which saw EPICA perform in front of more than 4,500 people, with fans joining from over 50 different countries.